Scattered across the Northern Realms and the Nilfgaardian Empire

A half-elf is a child of a human and an elf or of two half-elves. Half-elves inherit characteristics of both their parent races, but are treated with distrust and often contempt by both elves and humans. A human with a quarter of elven blood is called a quarter-elf.

Like humans and elves, half-elves vary by appearance, with some easier to detect their half-blood status than others. For example, the half-elf Schirrú was commonly referred to as a half-elf before his name was even known to others, with a dead giveaway being his eyes: large, almond-shaped, and yellow-green.[1] However, others, like Beatrix of Kovir, were said to display almost none of their elven heritage and even by human standards she was considered ugly.[2]

In the years following 1263, many half-elves chose to support the Scoia'tael, due to the prejudice growing related to nonhumans. While some volunteered to join their ranks, others simply chose to provide shelter and food for the guerilla forces.[3]

During the quest "A Ghost Story", Geralt rescues a half-elf from a gang of thugs who have been holding her against her will in an abandoned house in the slums of the Temple Quarter. The following journal entry is the direct result of this rescue and its subsequent reward.

"Vizima is also home to half-elves, born of unions between humans and elves. Female half-elves are possessed of a delicate, inimitable beauty. Many are fluent in the Elder Language."

After Geralt saves her he can speak with her to get her card. She can be found in a house almost exactly opposite Vivaldi's place, across a small barrier (you can enter this part of the green light district from the St. Lebioda's hospital side). 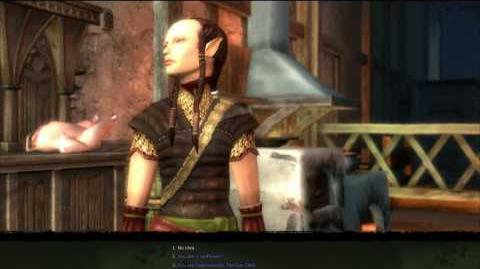 A half-elf from The Witcher 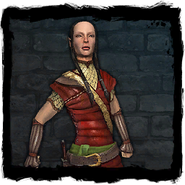