Tunnel of the Founders

A Matter of Life and Death
Courage Symbolized
Death Symbolized
Faith Symbolized
Hatred Symbolized is a quest in Chapter 2 of The Witcher 2: Assassins of Kings. It is a part of both paths in the game, and it is one of several quests that must be completed to advance The Eternal Battle.

Exit Vergen and walk past the burned village, head to your left through the stone archway. You will encounter a small shrine, with three paths open. The right path (to the right of the shrine) leads up to a dead end. The center path leads you to Elthon's hut and the old quarry. The left most path will lead you to to an entrance to the Tunnel of the Founders. Take the left most path.

The entire region here is very dark, so you must use Cat potions or Flares in order to progress through the mine. Common enemies include nekkers and rotfiends, along with two bullvores. There will be a clearing in the mine where you fight a bullvore, past that room you will find Zoltan and Saskia, who will freely give you the Commander's sword.

If you sided with Iorveth in Act I this quest will be automatically completed upon completion of another quest, A Matter of Life and Death. Once Saskia recovers, she tells Geralt that he should simply have taken the sword while she was ill.

Zyvik told Geralt that Vandergrift, the infamous butcher, had had a sword named "Hatred." If anything linked to the battle was the symbol of hatred, it was this very blade. Rumor had it that the weapon was in the possession of the Dragonslayer, and therefore seemingly out of Geralt's reach.
The course of events would finally carry the witcher to the other side of the mist. Geralt was sent to Vergen to acquire Yahon's spearhead, supposedly in Iorveth's possession. The sorcerer Dethmold helped our hero cross the cursed battlefield, and Geralt hoped to acquire "Hatred" on the other side, too.
Talking to Yarpen and young Burdon confirmed the rumor - Saskia had Vandergrift's sword. Zoltan was a dwarf and, unlike Geralt, he could enter Vergen, so he promised to acquire the weapon. The friends agreed to meet in an underground tunnel, a secret entrance to the town.
The corridors beneath Vergen, known as the Tunnel of the Founders, were considered secret. Nevertheless, Geralt managed to find the concealed entrance. Now, all he had to do was find his friend Zoltan somewhere down there.
Sending Zoltan out on an espionage mission is like asking a bear to knit you a sweater - nothing good is likely to come of either. Dwarves are just ill disposed to doing things discreetly. The plan to get the sword secretly proved a miserable failure. At the meeting place, Geralt found not only Zoltan, but also Saskia. The Dragonslayer had squeezed the dwarf for information and plucked it from him one word after another. She then expressed a desire to meet the witcher personally. Luckily, Saskia proved to be a wise and compassionate person. After a courteous discussion she honorably handed Geralt the sword.

The witcher learned that to lift the curse from the battlefield he would need mementos of the battle representing the virtues and horrors of war. He was concerned because he knew very little about the clash between the Aedirnian and Kaedweni armies. Philippa Eilhart then told him to see Cecil Burdon, Vergen's alderman, who was reputed to b e a real trove of knowledge on the subject. Geralt went off to question the dwarf about the battle.
Cecil did not disappoint. He knew a lot and gladly shared his knowledge. The alderman told Geralt that the symbol of hatred could only be the sword of the infamous Vandergrift, bearing the dreaded but fitting name of "Hatred". Unfortunately, the blade belonged to Saskia the Dragonslayer, who had been poisoned and lay dying. Though the witcher had stolen from the dead or dying in the past, in this instance he decided to stay his hand.
The healed Dragonslayer had no objections and handed the Witcher Vandergrift's sword while expressing her gratitude. Our hero acquired the symbol of hatred. 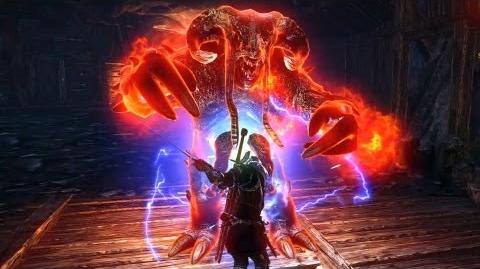