Witcher Wiki
Register
Don't have an account?
Sign In
Advertisement
in: Hearts of Stone, The Witcher 3 expansions
English

Edit
watch 02:00
The Witcher 3 - Hearts of Stone - Launch Trailer
Do you like this video?
Play Sound

REDengine with Umbra 3, PhysX and SpeedTree

See System Requirements section.
Hearts of Stone is the first add-on adventure for The Witcher 3: Wild Hunt. It was released on 13 October 2015 for all three major platforms: PC, PlayStation 4 and Xbox One. On October 15, 2019, it was released for the Nintendo Switch.

Hearts of Stone will take Geralt on an all-new, 10-hour-plus adventure into the wilds of No Man's Land and the nooks and alleys of Oxenfurt, where he'll try to complete a contract from the mysterious Man of Glass. Caught in a thick tangle of deceit, Geralt will need all his cunning and strength to solve the mystery and emerge unscathed.

The expansion features new characters, new powerful monsters, unique romance and new Gwent cards. It will introduce a new gameplay mechanic called Runewords that " significantly affects gameplay. Each Runeword will impact a different aspect of in-game mechanics and will allow the players to experiment with various strategies and tactics". The quests are designed for Geralt characters level 30 or higher.

Step again into the shoes of Geralt of Rivia, a professional monster slayer, this time hired to defeat a ruthless bandit captain, Olgierd von Everec, a man who possesses the power of immortality. The expansion lets you choose your own way through an adventure that includes recruiting a crew of break-in artists, spending a night partying with a ghost and outsmarting the most bizarre creatures Geralt has ever faced.

For a complete list of the quests in the expansion, see: Hearts of Stone quests.

Olgierd von Everec and his henchmen 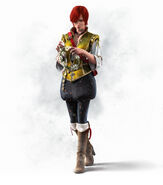 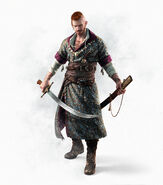