Witcher Wiki
Register
Don't have an account?
Sign In
Advertisement
in: Creatures, The Witcher bestiary, The Witcher Chapter I
English

Immune to most effects; it is a corporeal creature, so knockdown or stun attempts are possible, yet rarely successful

Sensitive to steel; the Fast Style is most effective against hellhounds

Able to summon barghests; a hellhound traps its victims in a circle of fire and proceeds to tear them to pieces

Trace of the Beyond, an iridescent mark
The list of misfortunes that can befall the inhabitants of a village includes plague, war, and taxes. The worst misfortune, however, entails the appearance of a ghostly hellhound known simply as The Beast. Many bad things can be said about this creature, but they all come down to two things: blood and pain.

Received by reading Berengar's notes on the Beast.
"The hellhound, referred to also as the Beast, is a creature of the underworld, a specter that assumes the form of a terrifying hound and tirelessly stalks its victims once it finds their trail. Peasants believe that the hellhound embodies the vengeance of the gods, who send the Beast to punish humans for their wickedness."

Killing the Hellhound with one easy blow (Aard skill does not have to be upgraded to include Stun):

The game jumps to midnight so you need to get into the cutscene past the cave at 22:00-23:00 so that your magic is still working at that point. To do so take following steps:

If you are playing Hard Mode and are still having problems there are a few things you can do to make the fight even more easy: 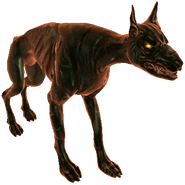 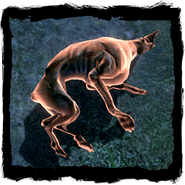