The Holy Grail makes at least two appearances in the Witcher series. A precious chalice made of milky opal was found by gnome Percival Schuttenbach on the top of mountain Montsalvat. In the short story "Coś się kończy, coś się zaczyna (short story)", the young knight Galahad mysteriously appears from the mists searching for the grail, only to wind up an unexpected guest at Geralt and Yennefer's wedding.

The legend of the Holy Grail has been studied for centuries. It was interpreted in myriad ways. There are hundreds of theories, but three of them are the most cited. The classic theory, the conspiracy theory, and finally the philosophical, or mystical explanation. In the Hermit's words, these three are described as follows:

The Grail is a cup, a powerful magical object whose meaning cannot be fathomed by even the most powerful sorcerers.
This chalice possesses the power to heal all diseases, poisonings, and wounds — "And pain will turn into power." One theory also states that in the hands of a rightful ruler, it can heal entire lands and protect their inhabitants from danger, creatures of the dark, natural disasters, and so forth.
All who drink from this miraculous cup are healed, fortified, and enlightened to understand the Truth.

This was popularized by Bronze Dan[1] and begins with a convoluted theory about the derivation of the word Grail. A few tortuous pages in, we learn the Holy Grail is actually Sang-Real, which in the elder tongue denotes royal, "hallowed blood."
Bronze Dan concludes that the Grail is actually the descendents of the prophet Lebioda...
These descendents, talented in the ways of magic, were protected by a secret organization before they ultimately mixed their own blood with that of Aen Seidhe, the Knowledgeable One.
The theory goes on to present the tempestuous and twisted fate of Sang-Real, but the author gets lost in his arguments, often contradicts himself... generally it turns into an unholy mess.

The philosophical or the mystical theory[]

Hmmm... the most esoteric. The Grail is a concept, a general understanding of Good. The search for the Grail is nothing beyond an ordinary quest for perfection.
The Grail has no specific form or shape. It differs for each individual: it can be an object, an idea, a discovery. It can also be a search for the truth about oneself.
This theory claims the quest for the Grail to be the goal in itself. The result is of secondary importance.
I serve the Lady and am more insightful than you think. I know you returned to the world of the living from death, presumably in search of something, but that is none of my concern. Just remember one thing...
At the end of your journey, the Grail may prove to be entirely different from what you initially expected it to be. 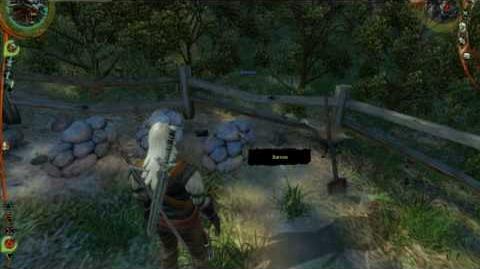