Wields a large improvised flail made from a ship anchor

Elemental essence
Monster brain
Monster eye
It is hard to provide a detailed description of the ice giant, for no witcher has ever faced it. It is known only from tales and second-hand reports that mix fact with legend. Skelliger claim its skin is blue because it was born of snow and ice, which is, of course, clearly impossible, though it does indeed seem capable of withstanding the fiercest frosts and in fact seems to draw strength from them.

It can bind other creatures to its will, sirens in particular. It treats its victims cruelly and is particularly fond of human flesh. It uses simple weapons made from items looted from the bodies of those it has slaughtered.[1]

Fled one time in my life. From the Ice Giant. And know what? I'm not a bit ashamed.
– Rasmund Kvaalkje, Clan Tordarroch oarsman
This powerful, primeval monster is quite possibly the last of its race. The Ice Giant resembles a man in many respects, but is blue as frost and taller than a tree. Though it seems capable of reason, all attempts to communicate with it to date have ended the same way – in a quick and painful death.

Though similar to the cyclopses in terms of combat ability, there is one aspect of the ice giant that must be cautioned: reportedly, the monster draws its strength from cold weather, with blizzards allowing them to reach their physical peak.

Creatures such as sirens can be bound to the will of an ice giant. Witchers should coat their silver swords in oil that affect any potential allies to the ice giant to help eliminate them more quickly.

A Horrval horn was once crafted to help repel sirens attacking Skelligers, knocking them out of the sky with a single blast of noise. Having the horn would be of great use against an ice giant, directing the sirens to attack its enemies. As with a cyclops, evasiveness and footwork are your best defenses against an ice giant. Use Yrden to improve your chances of avoiding any attacks! 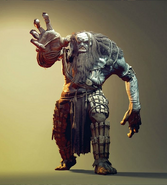 Screenshot of the 3D ingame model.

Another screenshot from the Ice Giant's cave (demo version).

The Giant's weapon of choice - a ship anchor.