Edit
watch 12:30
'The Witcher' Lore: Imlerith The Wild Hunt General
Do you like this video?
Play Sound

Imlerith was one of the generals of the Wild Hunt. He wielded great power, and was one of the most formidable opponents Geralt encountered. Geralt and Imlerith were also acquaintances during Geralt's service with the hunt. The Hunt's second general alongside Imlerith was Caranthir Ar-Feiniel.

Before Battle of Kaer Morhen[]

When Ciri returned to the Continent, Imlerith ordered the Crones to keep an eye out for her and so they used the human ears they had strung up throughout Crookback Bog to do so. When Ciri later did teleport to Crookback Bog, she ended up right in the hands of the Crones. While the Crones sent word to Imlerith that Ciri was there, Ciri overheard their plans for her and escaped, running back into the woods. Imlerith showed up just as she did and pursued Ciri on horseback but she managed to evade him.

During Battle of Kaer Morhen[]

Imlerith later participated in the battle of Kaer Morhen, his presence forcing Geralt's hunting party to retreat. Imlerith gave pursuit, but the witchers made it inside the keep and closed the main gate, which Imlerith furiously pounded his mace against.

The Hunt eventually broke into the heart of Kaer Morhen, freezing everyone but Ciri and Vesemir. Imlerith engaged the old witcher, enabling Eredin to get a hold of Ciri. Vesemir broke away and stopped Eredin from escaping with Ciri. Imlerith charged at Vesemir, wrapping his hands around his throat just as the witcher pushed Ciri away with Aard. He began strangling Vesemir but ceased at his king's command, to use Vesemir to force Ciri to surrender. Just as Ciri dropped her sword and the Hunt's victory seemed all but assured, Vesemir stabbed Imlerith with a knife. The attack purposefully provoked Imlerith, who proceeded to effortlessly snap Vesemir's neck, killing him. In a grief stricken rage, Ciri unleashed a magical scream that left the Hunt clutching their heads in agony. Imlerith quickly fled through a portal conjured by Caranthir.

After Battle of Kaer Morhen[]

A few weeks later, Imlerith attended the Sabbath in southern Velen, where he is shown leisurely seated back in a throne accompanied by succubi at his feet. Confronted by Geralt of Rivia, the succubi slowly fled the scene and the mighty Imlerith's unperturbed gaze calmly fixated on the witcher. The elf then presumed to inquire if Ciri was with him. If Geralt chose to lie, Imlerith did not believe him. If Geralt confirmed that Ciri was with him, Imlerith demanded her location but was refused. Either way, Imlerlith rose and donned his helmet, menacing mace, and towering shield before engaging Geralt in combat.

Geralt's speed made for a formidable method of combatting the spectre's slower, massive mace swings. Halfway through the battle, Imerlith ditched his giant shield to begin a constant multitude of whirling strikes. Toward the conclusion of the grueling duel, Geralt ran the giant through. Unflinching, with brute strength, Imlerith's mighty hands pounded downward forcing the sword from his body and Geralt's hands. The general then gripped the momentarily staggered Geralt's neck with both hands while he swiftly lifted him in the air. He then asked the witcher who taught him to fight as he did. Geralt responded that it was the witcher he murdered (referencing Vesemir), before force-feeding a devastating Igni blast through the grill of Imlerith's helmet.

Consequently, the elf sustained severe burns to his head and neck. As he took off his glowing red-hot helmet and faced death with a devilish smile, Geralt grabbed hold of the monstrous mace and caved in his head from above, finally ending the cruel and sadistic Aen Elle general for good.

Tactics for the fight[]

Imlerith initially starts combat with his massive mace and shield, and he definitely meets the description of "walking tank". He is virtually immune to every sign, head-on attacks to his front are almost always blocked and even if you do get past his defenses to get hits in it takes quite a few to put him down. However, his attacks when using his mace one-handed are rather short ranged and cover a narrow area. Your best option for fighting him is to use a short-range Dodge directly past him when he's about to start his attack combo to get behind him (a Roll will put you too far away) and then immediately put 2 hits into his back. Only do 2, he will always parry the third with a spinning shield swipe and stun you. If you then Dodge again straight past him when he does the shield swing you may be able to immediately put another 2 hits in, when he will again do a shield swipe, potentially doing this dodge-double-hit several times in a row. Bombs may also prove very effective, especially Samum, since Imlerith is not immune to blinding.

Once he gets a bit past half health he drops his shield and starts using the mace two-handed, as well as teleporting around the battlefield after you. His attacks in this stage are longer range and sweep a wider area, and there is little chance of getting behind him to put hits in while he's in his attack combo. However, after several sets of teleporting attacks he will put one final smash into the ground and then will stay there for a few seconds, winded. This is when you can put several hits into him, where he will then start his attack set again. Keep rolling away during his main attack run and hitting him when he's winded and you should succeed.

Imlerith – a general of the Wild Hunt and a frequent guest in Geralt's nightmares – had been chasing Ciri for quite some time, striving to deliver her to his ruler, Eredin.
This powerful and brutal warrior had fought in the countless battles and campaigns for conquest waged by the Aen Elle in other worlds. He prized physical confrontation above all else, seeking out direct, bloody skirmishes where opponents pit their strength, agility and training against each other in a contest to the death.
Imlerith attacked Kaer Morhen along with the rest of the Hunt. There the keep's defenders witnessed heart-wrenching proof of this warrior's dangerous might. Vesemir, who had spent most of his long life with a sword in his hand, heroically stood to fight this foe but, to everyone's great despair, was bested after a bloody and hard-fought confrontation and perished at this monster's hands.
Regardless of race or birth, most warriors share common desires and delights. Imlerith was no exception. Avallac'h informed Ciri that he was wont to wallow in corporeal pleasures and would take advantage of his stay in our world to attend the Crones' sabbath.
Geralt and Ciri thus decided to meet him there and engage him in a final confrontation. Geralt won this battle, killing Imlerith and thus avenging the death of his master, Vesemir.

Imlerith, one of the commanding officers of the Wild Hunt, is Eredin's right-hand man and most fervent supporter. This powerful and brutal warrior is a veteran of the many wars of conquest the Aen Elle have waged against other worlds over the course of centuries. Imlerith prizes physical confrontation and direct, bloody battles in which training, quickness, and strength determine who lives and who dies.
Imlerith's armor is covered with blade marks—mementos earned during his thousands of battles. His high, heavy brassards protect his neck and shoulders as well as his head. Like the other warriors of the Hunt, his chest is protected by armor with a reinforced, openwork breastplate stylized to resemble a bare ribcage. Steel gauntlets and decorated, segmented bracers guard his hands and forearms, while his thighs, knees, and shins are covered by their own layer of armor. The whole ensemble combines to make this terrifying Aen Elle nearly invulnerable to all blows.
pg. 154, The Witcher 3: Wild Hunt Artbook 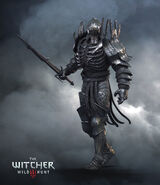