In the Claws of Madness

In the Claws of Madness is a quest from Chapter 1 in The Witcher 2: Assassins of Kings.

This quest can be initiated by talking to Cedric and asking him for work. He will tell you about two missing men who went off to explore the burned-down hospital nearby.

You will find one of the missing men (the quest can be picked up directly from Rupert if Cedric has not been spoken to first) near five crazed nekkers, next to some ruins poking out of the ground to the south of Flotsam. Follow the map marker over to the fresh corpse of Gridley's dog (there is no way to save the dog, and even though it glows when the witcher's medallion is activated, there is nothing to loot from it). Nearby a set of stairs lead underground.

Go down the stairs, and explore the ruins until you come to a large room with a wooden trap door in the center. Once you loot the chest in the room, two wraiths will spawn and attack you. If you have trouble with them (and many people do), you can use this simple solution with traps, 100% effective no matter what level you are. Once you kill the wraiths, you'll see some ghosts (non-hostile), and a wandering ghost soldier who seems to spawn fire that blocks off certain paths. Follow the open paths to more chests and wraiths.

Eventually you will encounter Gridley (one of the missing explorers), who is rambling and needs some medicine to calm him down. The medicine is in the room on the right before the wall of fire, next to two more wraiths. After you give Gridley the medicine, he will tell you what happened to the sanitarium and explain that the wandering soldier is a cursed ghost that haunts the area.

Talk to the ghost, who demands retribution.

You can either trick Gridley and his friend into coming back down to the ruins (where they will be killed), or you can trick the ghost either by giving him the hearts and eyes of nekkers or pigs, which he will eventually realize are fake, and you will have to fight him. It doesn't matter which eyes and heart you use, neither are the hearts and eyes of murderers which ghost wanted.

If you kill the ghost, Gridley and Rupert can be left alone or taken into custody by Loredo's mother (who is, in fact, the only surviving patient of the asylum - raped by its guards, she later slit their commander's throat and escaped with a treasure map). If you betray Gridley and Rupert, you can loot Gridley's body for the diagram of a silver sword.

Do you like ghost stories? You are going to hear a lot of them. Ghosts appear for the first time in this story in Flotsam, in a house standing in the depths of the forest... But let us start at the very beginning. It all began when Geralt was talking with Cedric. The elf told him about two men who had headed for a ruined mansion – a place where the mentally ill had once been kept - and had never come back. The witcher was intrigued. He decided to see what happened to them.
Not far from the ruins Geralt found the first traveler. Rupert was sobbing by a tree, evidently looking for something. The moment he saw the Witcher, he started begging for help, for his friend Gridley, who disappeared in the ruins. The Witcher heard the howling of Nekkers and understood that this was no joke. He reached for his sword.
After entering the hospital's basement, Geralt experienced something even more paranormal than the usual fare for a witcher. he saw a ghost that sent him a vision. everything around them started to burn and the specter - in true ghostly fashion- passed through the wall into the next room. Geralt recovered and followed the it, though not through the wall.
The chest contained some doctors' notes. these stated that the medical staff had carried out experiments on the mentally ill. Geralt read on and learned that a group of soldiers had brought a Nilfgaardian prisoner to the hospital. The soldiers had wanted to interrogate him, but the notes did not reveal how that story ended. Geralt started searching the mansion, looking for signs Gridley might have left.
Phantoms, like people, know how to set traps. Geralt followed the specter and was attacked by a horde of hungry wraiths. as he started to defend himself, he noticed a chest standing against a wall.
Finally Geralt managed to find Gridley. The poor soul was trying to keep imaginary specters at bay, raving about a fire and a girl that died in it. Geralt had to look for tranquilizers.
And he found a bottle of medicine, which he brought back to the hospital.
Calmed by the medication, Gridley talked of past events. He and Rupert had been stationed in this place years ago. They had killed the priest who tended to the ill, and tortured a captive Nilfgaardian, hoping to learn the location of a huge treasure. They set a fire to cover their tracks and abducted the most attractive patient. Hearing the story, Geralt understood that the place was cursed and that finding the tormented Nilfgaardian's ghost was the key to the matter.
The lost soul desired only one thing - the death of his former oppressors. He still felt their stares upon him, and only death would bring him peace. he wanted to consume the eyes and hearts of his tormentors. Geralt returned for Gridley and took him back to the surface, to Rupert.
If Geralt surrenders Rupert and Gridley to the ghost:

The witcher had already decided how to lift the curse. Then he lured Rupert and Gridley into a trap, telling them he disposed of the wraith.

If Geralt decides to trick the ghost:

Geralt decided to lift the curse, but he had no intention of giving Rupert and Gridley to the wraith. He decided to trick the ghost by bringing it the eyes and hearts of animals or monsters. He went to the butcher in Flotsam. Along the way, he decided that nekkers would make good organ donors too.
If Geralt uses nekker hearts and eyes to try to fool the ghost:

Instead of killing Gridley and Rupert, our hero decided to slaughter a few nekkers. Gutting the monsters, he extracted the hearts and eyes from their carcasses. Someone unfamiliar with the differences between human and monster anatomy might mistake these for human organs. With his trophies in hand, the witcher went to see the Nilfgaardian's specter.

If Geralt purchases pig hearts and eyes to try to fool the ghost:

Pig eyes and hearts bought at the butcher's stall were suitable enough, though they would not fool someone familiar with human and animal anatomy. The witcher took them back to the voracious specter.

Blinded by his lust for vengeance and hunger, the ghost fell for the trick. He lifted the curse from his oppressors, but when the treachery was revealed he attacked Geralt in fury. He was up against a witcher though, and Geralt dealt with him in no time.

After the fight, Geralt had had enough of the haunted hospital. He wanted to close the case for good so rushed to find Gridley and Rupert.
If Geralt allows Rupert and Gridley to flee:

The curse was lifted, the ghost passed into oblivion, and Geralt had had enough of looking at Gridley and Rupert. He told them to get lost and they jumped at the occasion, content to escape with their lives. Thus ended[sic] the story of the burned hospital's haunting was concluded.

If Geralt brings Rupert and Gridley to Loredo:

The curse was lifted and the ghost passed into oblivion, but justice still 'had to be done. The witcher decided to hand Rupert and Gridley over to the Flotsam authorities. Willing or not, they followed the witcher to Loredo's mansion. The soldiers at the gate ridiculed the witcher, but, as they were mocking his desire for law and order, Marietta Loredo peeked outside. She had the criminals brought inside, and nobody dared to oppose her order. In this mysterious manner the story of the burned hospital's haunting was concluded. 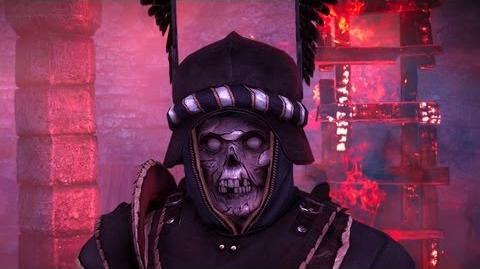 In the Claws of Madness (The Witcher 2) Full HD

The door to the hidden room
Deutsch Français Italiano Polski Русский
Community content is available under CC-BY-SA unless otherwise noted.