Indecent Proposal is a quest in Chapter I of The Witcher 2: Assassins of Kings.

The side quest begins when Flotsam's Commandant Bernard Loredo invites the witcher to come see him at his residence (he specifies evening-time, and the witcher will not be able to pass the front gate (a) at any other time of day, including during Fight Club; (b) without giving up his weapons (which he may collect from a chest behind the guard after leaving the residence). Vernon Roche joins the witcher just before entering, spots a ballista just after they enter Loredo's front yard, which triggers The Ballista. If Geralt hasn't yet killed the kayran, a merchant interrupts a discussion of what to do next, and mentions that there is a component for a trap hidden in the rear compound.

Roche distracts the nearest guard to give Geralt the chance to sneak behind Loredo's residence. The witcher then finds a second guard patrolling back and forth, easily sneaks by him by going around the other side of the boulder to the right of the guard. He can also sneak up behind the guard and knock him out to make the return trip a bit easier.

Around a corner of the main building a third guard watches the door to the garden. This guard will take a piss at some point, giving a perfect opportunity to either knock him out or climb an overhanging ledge. Even if the guard is knocked out,

Note: Be careful of the bucket next to the wall around the corner. If you go too quickly, you will tip it over and alert the guards. Avoid the bucket and knock out the guard when his back is turned.

After having dealt with the third guard, Geralt finds the door he was guarding locked, so must climb up to his right to circumvent the wall.

Once inside, and after a bit of sneaking around, Geralt spots Síle standing by a window. Taking note of the walking patterns of the guards in the area, Geralt then proceeds to either avoid them as he makes his way around, or knock them out making it a bit easier to get around unnoticed. There are more buckets to avoid (though if all guards are knocked out these become irrelevant, they are still 'detected' by the witcher medallion). Climbing the ladder nearest the previously mentioned window puts Geralt in range to eavesdrop on Sile's conversation with Loredo. This doesn't reveal much, but it becomes clear that Sile has made Loredo an offer, and that he has not yet decided about it. The sorceress expresses her contempt for Loredo's methods of government; each of them speaks grimly of the other's 'inevitable' fate at the hands of the masses they both treat with disdain in their own ways.

Return to Roche and report - this may be thorough or edited, but in either case the pair soon discovers that Loredo wishes to speak with Geralt alone. Roche bristles, but the witcher talks him down and proceeds inside. Guards block access to the first and third floors; a discussion with Loredo begins as soon as his desk is approached.

The commandant means to persuade the witcher to capture Iorveth. Geralt may ask the occasional question (such as why Lordeo doesn't seem to trust Roche) and either nod politely through the exchange or call Loredo out on his or his men's brutality and racism; in any case, the bottom line is whether or not the witcher flatly refuses to work with Loredo.

Regardless of whether Geralt agrees to Loredo's proposal, and despite no words having been exchanged with the third man in the room, this conversation grants a journal entry for Arnolt.

An inner courtyard, also guarded, is accessible within the area. Geralt has a few options to enter it: he may have already found the key to the door while searching the rest of the area, and so can sneak by the guard and get into the area that way, or he can jump over the wall to get in, or he can knock out the guard and then either open the door or jump over the wall. In that area, he'll find the trap component and depending on the difficulty setting, some rare armor. After that, he can simply climb the ladder and jump down into the front courtyard of the manor.

When the dust at the gallows had settled, Loredo invited Geralt for a talk. Even if we ignore the fact that witchers, like troubadours and scholars, never refuse free board, it was a good occasion to feel out the commander. Geralt accepted the invitation.
Geralt reached the place in the company of Vernon Roche. If he had been going to a country dance, I would have considered it a poor choice. However his aim was to gain information about the kingslayer.
The commander turned out to be a busy man, and our heroes were rudely turned away at his door. They decided to wait downstairs and talk.
If Geralt successfully sneaks into the rear compound:

When Geralt realized that Loredo's important business was with a sorceress, he nearly gasped. You should know that the witcher is extremely partial to sorceresses, and never misses an opportunity with one. And the mistresses of magical arts also afford him exceptional favor. Can you imagine the thrill he felt at the news that a sorceress was holding a clandestine meeting with the most important man in the area? Sneaking around the back of the building to eavesdrop was the only course of action! It should be added that one of the merchants invited to the party told Geralt where to get a piece of a trap for the kayran. Even then the witcher was thinking of a way to hunt down the monstrosity prowling the river, and a trap could prove very handy. Our hero only had to sneak to the back of Loredo's mansion, to a chest standing on a wooden platform by the wall.
Skillfully evading guards and assorted obstacles, the witcher moved through the garden to the back of the building. Once there, he overheard the commandant and the sorceress conversing. They were clearly involved in some scheme together, yet just as clearly at each other's throats. It was all well worth hearing! Our hero, silent as the days that follow a marital quarrel, returned to talk to Vernon Roche.
Richer for having overheard this and that, Geralt found Vernon Roche, and the two went to see Loredo, this time using the front door.

Loredo made the witcher an offer. Geralt was to capture Iorveth and thus repay the dept he had incurred on the scaffold. I need not explain the difficulty of this task. Suffice it to say, an entire military garrison had been unable to complete it. In spite of very poor odds, the witcher accepted the job.
Thus the witcher left the commandant's mansion as a friend. Loredo was certain he had found the perfect tool with which to carry out his less than honorable plan, but time would prove just how wrong he was...

Loredo made the witcher an offer. Geralt was to capture Iorveth and thus repay the dept he had incurred on the scaffold. I need not explain the difficulty of this task. Suffice it to say, an entire military garrison had been unable to complete it. Geralt, however, mindful of the witchers' code, declined.
When the witcher declined, Loredo grew outright irate. Leaving the commandant's house, Geralt suspected he might have made a new enemy. Time would prove him right. 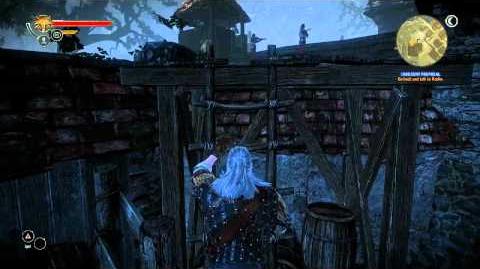 The Witcher 2 (017) - Indecent Proposal
Retrieved from "https://witcher.fandom.com/wiki/Indecent_Proposal?oldid=510951"
Community content is available under CC-BY-SA unless otherwise noted.