Sword of Destiny
Baptism of Fire
Istredd was a well-respected sorcerer in the city of Aedd Gynvael with a keen interest in archaeology. As a young apprentice, he studied under Roedskilde.

He was one of Yennefer's long-time lovers whom she had known for many years, often visiting and staying with him for several months. During one such occasion, when Yennefer traveled with Geralt to Aedd Gynvael, the two men learned of each other. Both Istredd and Geralt were unwilling to share Yennefer, with Istredd not caring if Yennefer had several non-serious lovers, but refused to share her with someone she was seriously in love with. During this time, he asked her to marry him and live together at his residence. Yennefer did not immediately give him an answer and became torn between picking Istredd or Geralt.

Istredd and Geralt then challenged each other to a duel to the death for Yennefer's affections (although they both knew whoever won would have to hide from her for some time until her rage ended). Both believed that Yennefer could not decide between them. However, Istredd, before going to fight Geralt, received a letter from an enchanted kestrel sent by Yennefer telling him she had chosen to leave him. Istredd in grief, turned up to the fight bearing a sword instead of magic, hoping that Geralt would kill him.

Later, Geralt met him in the agreed location, but once he found out that Yennefer had left Istredd, as she had left the witcher a similar note, he decided to leave without fighting.[1] 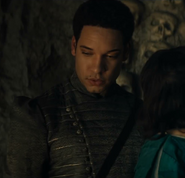 Istredd in The Hexer TV series