Witcher Wiki
Register
Don't have an account?
Sign In
Advertisement
in: Aedirnians, Humans, The Witcher characters,
and 4 more
English

Grandmaster of the Order

Jacques de Aldersberg was the last Grand Master of the Order of the White Rose. Responsible for sweeping reforms, he changed the organisation into the Order of the Flaming Rose- the Church of the Eternal Fire's militant arm. He also possessed innate "source" powers, though he had no formal training and thus, had little control of them.

Jacques later died in 1270 during his attempted rebellion against King Foltest.

Before joining the Order, it was rumored that he was a vagrant fueled only by his hatred of non-humans.

In 1268, after the death of Grand Master Rudolf Valaris, the mantle passed to Jacques who used his new position to carry out radical reforms that completely changed the structure and goals of the Order. Under his leadership, the order was renamed the Order of the Flaming Rose, and its rules were adopted from the tenets of the faith of the Eternal Fire.[2] This was secretly supported by Sigismund Dijkstra of the Redanian Secret Service, who wanted to create an organization full of fanatics and spread fear against mages to counteract the mages' rising influence on politics in the Northern Kingdoms.[3]

Most Temerians, whether they were nobility or peasants, admired the Grand Master because of his charisma, glistening armor, and above all the enormous scale of persecution aimed at elves and dwarves who were, by some, considered enemies of society after the Northern Wars. Remaining commandos of the Scoia'tael became the biggest opponent of the Order, with Jacques using particularly brutal means to defeat them. He also waged secret wars against other clandestine organizations like the Lodge of Sorceresses in order to win as much power over society as possible.[4]

In 1270, when King Foltest left the city for a short time, Jacques used his absence to sow seeds of chaos in Vizima and nearby surroundings, increasing hate towards non-humans, secretly supporting the Salamandra gang, and provoking Scoia'tael into all-out war. All of this was designed to try and overthrow Foltest to bring about a new age, and destroy all non-humans, whom he viewed as unworthy relics of the past. Using stolen witchers' secrets, and with the aid of the Salamandra leaders "Professor" and Azar Javed, Jacques created mutant soldiers to uphold the increasingly twisted ideals he espoused.

When Foltest returned and had a tour through Old Vizima, he was attacked by Scoia'tael and was saved at the last moment by Jacques. The Grand Master then demanded to be given full command of the troops and the city, but Foltest refused. It soon became clear that Jacques would stop at nothing to achieve his goals and released Greater Brothers into the streets. Realizing the Grand Master needed to be dealt with, Folest enlisted the witcher Geralt's help.

When Geralt confronted Jacques, the two spoke to each other for a long time with the Grand Master trying to show Geralt his visions and beliefs but he couldn't be swayed and ultimately the two fought in the Ice Plains.

History is full of charismatic leaders who, by their deeds, etched their names in the annals of kingdoms and nations. Jacques de Aldersberg, Grand Master of the Order of the Flaming Rose, was beyond any doubt one such figure. He died at Geralt's hand and his rebellion against King Foltest was crushed, yet both these events left their mark on Temeria and its political situation, and their echoes can be heard to this day. 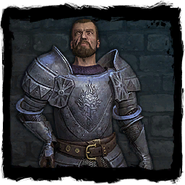