The Tower of the Swallow

Jan Calveit was Emperor of the Nilfgaardian Empire, succeeding Morvran Voorhis. In 1328, he rehabilitated Peter Evertsen, coadjutor of the Empire, who was falsely accused of misappropriation of funds and died imprisoned in 1301, during the reign of Emperor Voorhis.[4]

Dominik Bombastus Houvenaghel was one of his faithful counselors and the emperor even granted him with titles of burgrave and zupparius salis of Venendal.[5]

He was aware of Emhyr's mistakes and tried to not repeat them. He was also apparently forgiving and able to give second chances.[1]

As a young man, Emperor Jan Calveit served in the Magne Division, which was charged with the defense of the Empire's eastern border along the Tir Tochair mountain range. During an expedition against a crew of nomad outlaws roaming the Korath Desert, his unit fell victim to an ambush. Calveit alone escaped with his life. For weeks he wandered the hot sands, wounded and exhausted. He eventually returned home....though forever a changed man.

He founded a medical academy in Vicovaro. At first, the city's residents were proud of the stately edifice and the sharp young men who studied there. Soon, however; respect turned to fear and loathing - rumors had it that the doctors valued the corpses of the ill more than their lives.

Before long, word circulated quickly of lethally wounded soldiers who miraculously returned from the field hospital back into the fray on the field of battle. The soldiers hid their faces; under no circumstances would they remove their helmets.

Greatly upset by the ghastly rumors of soldiers returning from the dead, Nilfgaardian aristocrats conspired to assassinate Emperor Calveit. However, their plotting was extinguished as quickly as it began as Calveit's astrologers had long foreseen their treachery.[1]

Emperor Jan Calveit had broad intellectual horizons. He dabbled in a variety of scholarly disciplines; medicine and astrology in particular. His critics complained at his hobbies' lack of practical application, until the time came to prove how very wrong they were.

Jan Calveit knew proper preparation was half the key to winning battles. That is why he was meticulous in perfecting his own plans - and doing whatever possible to thwart those of his enemies.

He was keen to say that to prepare for the future, you must first know it. Thus he surrounded himself with mages, seers and astrologists able to read the stars for what tomorrow would bring. Judging by Calveit's successes, at least a morsel of what they divined must have come true.

Jan Calveit had a deep scar extending diagonally across his face. Despite repeated offers from his court mages to hide or remove the mark, the Emperor always adamantly refused. He believed that those who do not reflect upon their mistakes are doomed to repeat them.

He preferred to observe battles seated in a throne placed at the edge of the battlefield. Even as flaming arrows whistled by and falling stones carved out craters in the earth around him, he would never stand and flee. "Our fates are written in the stars," he would say. "And my day has not yet come."[1] 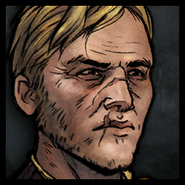