Deceased (burned at the stake by Witch hunters)

The Witcher
The Witcher 3: Wild Hunt (mentioned)
Ha! Typically short sighted! Witcher, alchemy is the mother of all sciences, and do you know why? For it allows us to understand the world! All that surrounds us you is none other than the alchemy you strive so dutifully to deride! Alchemical processes transpire in your body at all times! They allow you to eat, breathe and excrete. What's more, they are responsible for your thoughts and feelings! Alchemy is life!
- Kalkstein to Geralt, The Witcher

Adalbertus Aloysius Kalkstein (died 1272) was a master alchemist, author, occasional armorer and honorary chairman of the Alchemists, Geomancers, and Pyromancers Club. While in Vizima, he owned a house in the nonhuman district of the Temple Quarter, right next door to Golan Vivaldi and just around the corner from Shani.

At some point, after a turmoil caused by the Order of the Flaming Rose and Scoia'tael, he moved into Novigrad where he lived his ordinary life until he was captured by witch hunters and subsequently burned at the stake.

Adalbertus Aloysius Kalkstein was a Master of Alchemy who, for the most of his life, inhabited a house in the non-human district of Vizima's Temple Quarter, in a neighborhood with dwarven banker Golan Vivaldi. However, at times, he would leave the city and travel to Oxenfurt where he would attend scientific discussions and convents.

Kalkstein was the author of many alchemical works, including a treatise called Transmutations and Metamorphoses analyzing attempts to animate inanimate matter, an activity otherwise known as constructing a golem. The alchemist has been interested in this matter for years but due to his convoluted style, his work was difficult to read.

Apart from being a very powerful alchemist, Kalkstein also knew a great deal about gnomish technology and elven mastery of crafting armor. To fund his researches and experiments, he ran a shop in his house and sold items related to alchemy such as books and scrolls, Ginatz's acid (15

Geralt and Kalkstein first met in the Outskirts where the state of quarantine was making it difficult for anyone to enter the city, and the alchemist was no exception. While Kalkstein waited to have his pass accepted, he bided his time at the local Inn.

The witcher immediately recognized that the alchemist was very interested in anything alchemical or unnatural. On his first encounter with the witcher, he asks if he can examine his body for scientific purposes. When Geralt took exception, he then relented and asked if he could perform an autopsy upon his death. This did not really go over well either so they changed the subject and never returned to such discussion.

Geralt met Kalkstein a second time at the Merchants' Gate, where he was threatened by Salamandra bandits who intended on taking his equipment, by force. After a quick round of swordplay, thugs were dispatched and a grateful alchemist offered Geralt a reward: his services anytime the witcher is in Vizima, at a discount. It was also at this point in his journey that Geralt realized the full extent of the repercussions of the theft of the Witchers' Secrets from Kaer Morhen and his resolve to track them down and make them pay is renewed.

Once Geralt got out of prison and took up his investigation of Salamandra, it did not take long before the name, "Kalkstein" cropped up again. Remembering that the alchemist's place of business was in the Temple Quarter, Geralt set to find it. From a shingle outside Kalkstein's house, he learned that the alchemist needed someone handy with a sword for his latest project. This seemed to be the project that excited him most: opening the mysterious Mage's tower in the swamp. Prior to Geralt, he hired Berengar to look into it, but that witcher just disappeared.

During the autopsy portion of the investigation into the murder of the crown witness, the alchemist became one of the suspects. If Geralt believed that Kalkstein was involved with the organization, Azar Javed seized the opportunity presented by Geralt's false conclusions and further blackened Kalkstein's reputation with tales of his alleged involvement with the Salamandra. Only after a confrontation with the real culprit at the Mage's tower did Geralt finally learn the truth.[1]

Opening the tower and Viziman riots[]

Once the tower has been opened, it became Kalkstein's main base of operations for a while. And fortunately for the witcher, there were no hard feelings if Geralt had implicated him earlier. Their relationship merely continued as normal. Of course, if the alchemist was not implicated, there was nothing to forgive, so it was business as usual.

Also in the tower, Kalkstein told Geralt about his new ground-breaking theory of invisible particles constituting matter, in constant movement and interacting with each other even though he can not go out with it yet as he does not have any good enough proof.

When the fight between the Jacques de Aldersberg's Order of the Flaming Rose and Yaevinn's Scoia'tael erupted, the alchemist moved with his laboratory to Old Vizima, where tales of Mutants and strigas roaming the streets have lured the curious scientist. If Geralt decided to stay neutral throughout the conflict, Kalkstein also became his armorer when it became necessary to fashion Raven's armor for the final battle.[1]

Life in Novigrad and death[]

After the events which transpired in Vizima, Kalkstein moved to Novigrad where he continued his alchemy workshop, earning his living selling potions and bombs. When Dandelion asked him for a substance strong enough to open Reuven's treasure vault, whose riches he needed to repay Cyprian Wiley, Kalkstein created a magical bomb from phosphorus and wyvern oil that stood up to a task.

Unfortunately, however, not long before Geralt's arrival in Novigrad, Kalkstein fell prey to Radovid V's witch hunts. He supposedly went out with a "bang". When he died on a pyre, fiery beasts surrounded him and shot into the air to form letters which spelled "Radovid sucks flaccid cock".[2]

The absent-minded alchemist seems nice, but it is obvious that scientific theories are of greater concern to him than the more prosaic aspects of life.
He lives in the part of the Temple Quarter inhabited by non-humans. He runs an alchemy workshop there, earning his living selling potions. But he devotes himself to his greatest passion — gnomish alchemy.
The alchemist sometimes uses the services of witchers. Berengar used to work for him.
Kalkstein has dealings with Vizima's criminal underworld. Strange company for an alchemist to keep.
I have proved that Kalkstein is not the Salamandra leader. I'm glad, because I've actually grown fond of the alchemist.
For the first time since I arrived at Kaer Morhen, I saw a truly happy man. The door to the tower in the swamp stood wide open, and at the thought of all the alchemical secrets waiting inside, Kalkstein was as delirious as a drunken dwarf.
Even though he calls himself a scientist, Kalkstein is an alchemist, so he definitely dabbles in magic.
Kalkstein is the author of many alchemical works, including a treatise analysing attempts to animate inanimate matter, an activity known otherwise as constructing a golem. Apparently the alchemist has been interested in this matter for years. Kalkstein's convoluted style makes his work difficult to read.
Riots and fires in the city drove Kalkstein from his laboratory. I met the alchemist in Old Vizima, to where he fled.

Kalkstein is one of the most prominent characters in The Witcher and is central to many quests: 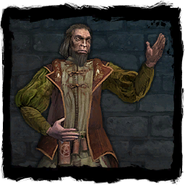