Witcher Wiki
Register
Don't have an account?
Sign In
Advertisement
in: Creatures, The Witcher 3 bestiary, Vampires,
and 2 more
English

Able to communicate via telepathy[1] or learn Common Speech

Ranging from pale to dark[2]

Katakans are a vampire race found in the Northern Kingdoms, where they first appeared around the 230s BR, through the Conjunction of the Spheres.

In natural form, katakans have many bat-like traits although somewhat larger and monstrous. They have long claws which continue to grow during all its life.[3] They are also capable of disguising themselves and acting as normal humans.[2]

As the rest of vampires, katakans are fully invisible to magical scanning and probing which means they cannot be detected by witcher medallions or master level detecting spells.[4] Unlike alps, bruxae, mulas,[5] and Higher Vampires they are susceptible to sun.

Like all intelligent vampire species, beginning with higher vampires and ending with nosferats, katakans enjoy drinking blood in smaller or larger doses but don't mutilate their victims by shredding them apart, leaving only bite marks.[4] They are however somehow wilder and more savage than the rest of the intelligent vampires.[1] Many of them like to wear shiny objects collected and woven into their fur.[3]

Melitele, Great Mother, protect us from evil, from unclean devils and foul demons, and most of all from the clutches of katakans and nekurats...
– fragment of a prayer
Katakans and their more dangerous kin, nekurats, are the embodiments of human fear. They hide in the shadows. They feed on blood. They resemble enormous bats – though with long fangs and even longer talons. And, as if that weren't terror enough, they can turn invisible, waiting unseen while dread of their unpreventable attack overwhelms their victim.
When fighting a katakan one must pay particular attention to its shadow – often the only way to know its location.
Katakans are invulnerable to steel, regenerate quickly, hear acutely and move at incredible speed. To even the odds one can temporarily immobilize katakans using the Yrden sign, then seize that moment to attack with all one's might – for there might not be another chance.
Unfortunately, the legends are wrong and the sun's rays do not turn katakans to ash. They are vulnerable to sunlight, however, and when the sun stands at its zenith their regeneration is considerably slowed.

Katakans are notably smarter and more powerful than ekimmaras. Their power only increases at night, and so a witcher should take additional precautions if they hunt one at those late hours. Alternatively, the witcher should wait for daylight, so the katakan's natural regeneration is impaired. Yrden sign is one of the most valuable tools when hunting a katakan, undoing its invisibility, allowing a witcher to feed them a silver sword.

Another way to draw out a katakan from invisibility is through the use of Igni, fire-starting bombs, and Moon Dust. One should remember that the katakan is far more likely to damage the witcher than the witcher is to damage him, so having Black Blood handy is just the thing to return the favor. 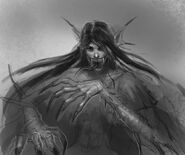 Transitional form of katakan from the leaked TW3 materials