Witcher Wiki
Register
Don't have an account?
Sign In
Advertisement
in: The Witcher 2 bestiary, Creatures, The Witcher 2 Chapter I
English

Crushes prey with its tentacles and exudes poisonous, sticky mucus

Essence of water
Kayran eyes
Kayran tissue
Kayran skin
Kayran trophy
The kayran is a boss monster from the first chapter of The Witcher 2: Assassins of Kings and is found near the small town of Flotsam. It is the first major boss fight in the game.

Killing the monster is the object of the quest The Kayran.

The kayran stands apart among all creatures, large and small, beautiful and horrible: it is unique, not alike any other being. Doubtless it is a post-conjunction creature that appeared in our reality in the time when worlds intermingled. It took up residence in the Pontar's waters, where it lives to this day. The chronicles mention instances when the kayran appeared on the river's surface in various places over the ages. There is no certainty whether it is the same creature slowly moving up and down the river, or perhaps his progeny seen here and there.
Over a hundred years ago the kayran made its lair near the trading post of Flotsam. The folk of the nearby village call it the Old Man. People have grown used to the monster's presence. Until recently, they even considered harmless. Lately, however, the kayran awoke and now emerges from the water. It has become aggressive: it shatters ships, shreds nets, snatches people from the river banks and pulls them beneath the water. Even the military cannot handle this plague, for the kayran hides in the water, where it is impossible to fight.
To defeat the kayran, one first needs to pull it onto dry land or drain the river meander where the monster lies in wait. If that trick works, it will be possible to approach the monstrosity. The creature defends itself with long, heavy tentacles - an ordinary man would die from a single blow, for these appendages weigh as much as a trebuchet arm and are covered in poisonous mucus. These tentacles should be cut off or immobilized during combat, for example using a special trap. Once the kayran is unable to shield itself, one should approach its trunk - but beware its venom! The monster spits its vile poison as skillfully as a street urchin. Its armor, tougher than that of any other creature - with the possible exception of dragons - is the final obstacle to overcome. One needs to find a way to pierce the carapace and get to the inner organs. Good luck!
The kayran laughs at poisons, or it would laugh if it had a sense of humor. It might even fall over from laughter, and that would be the only way to knock it down, but it's not going to happen. If the creature had a circulatory system like humans do, it might be possible to bleed it to death. Unfortunately it is a monster that makes other monsters seem like house pets, thus oils reducing blood coagulation cannot harm it. It treats most traps as garbage strewn on the ground, but witchers may be able to construct traps to immobilize its tentacles. 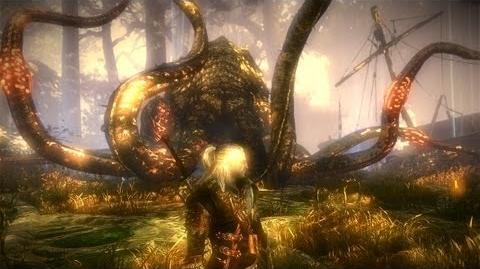 The Witcher 2 Killing the Kayran