The Witcher 2: Assassins of Kings
Blood and Wine expansion (mentioned)
Kennet was the youngest member of the original three Crinfrid Reavers, a group of mercenaries hired by King Niedamir to take part in the hunt for, Myrgtabrakke a dragon outside Barefield. He was known for his expertise with a two-handed sword. He fought alongside Gar and Boholt, their leader.[1] By the time of 1271, Kennet has seemingly become the leader of the Reavers and addressed Geralt outside Foltest's army camp.[2] A few years afterward, the Reavers grew in numbers with Kennet, Boholt, Gar and, to some extent, Newboy remembered as quite a legends.[3] 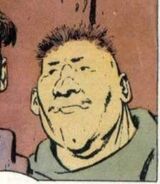