Witcher Wiki
Register
Don't have an account?
Sign In
Advertisement
in: Creatures, The Witcher Chapter III, The Witcher bestiary
English

A kikimore queen chooses quiet, damp and dark places, where she can lay eggs in peace; she surrounds herself with her offspring, creating a colony not unlike an anthill

Resistant to all effects; due to her very thick armor, a kikimore queen is very hard to injure, regardless of whether the sword is silver or steel

Kikimore queen moves very slowly – that is their only weakness

Can knock down and kill a man with a single blow

Kikimore queen's nerve
Witchers know hundreds of ways of fighting monsters. When tackling the queen of a kikimore swarm, only one method is effective — run like the wind. This tactic makes it hard to kill the beast, but it does ensure survival, which is a kind of victory.

The Queen cannot be fought properly, as it will inevitably kill Geralt in a single hit since the player is meant to escape, so don't waste time drinking potions for a boss fight. The player must instead run away from the Queen and use the Aard sign to first collapse the passage to slow down the queen and then use it to destroy the supports of the Salamandra Cave, which will bring down the section on top of the Kikimore and cause its death. However, experienced witchers fight the Kikimore Queen using the Brown Oil, Quen, and Aard signs. Bombs like the Devil's Puffball and the Dragon's Dream are also effective as well. Arguably the most easy method is by using Yeden with Cripling Sign unlocked, see The Unforgiven article for details. You can then retrieve the Professor's remains and acquire the Kikimore Queen's nerve that can be used to make the Kikimore's Ire potion.

Be careful when breaking the tunnel supports, standing too close will cause the rocks to collapse on top of you and kill you.

Some scientists claim that kikimores behave like ants. They are divided into industrious workers and protective warriors. Life in a kikimore colony is centered around a great, unceasingly procreating female. The landscape around the queen's nest looks like a desert, littered with the remains of unfortunate creatures which unwisely lingered in the area. Not even birdsong can be heard. 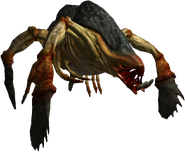