The King of the Wild Hunt leads a horde of specters - omens of misfortune and death - across the skies of the Continent.

William Roberts
No enemy is more terrifying than the King of the Wild Hunt, who leads a horde of ghastly riders across the sky. Doom incarnate, he fears no opponent, for he can always decide that his adversary is doomed, which usually determines the outcome of any clash. Over the course of the game, Geralt has several opportunities to meet the King, as his every step is dogged by the specter.

Over the course of the game, the King taunts Geralt each time they meet by twisting everything the witcher has done in an attempt to have our hero doubt himself and his own motives.

It is heavily implied that the Wild Hunt is pursuing Geralt as he runs through the forests near Kaer Morhen in the Prologue. In Chapter I he appears in the Outskirts along with the ghost of Leo. In Chapter IV, Geralt must be careful not to summon him while completing a quest for the Hermit. These encounters culminate at the end of the game and true to form, the witcher is faced with another dilemma, as the King has come to claim the soul of Jacques de Aldersberg.

I am persecuted by the Wild Hunt, a cavalcade of ghostly riders on skeletal steeds. Leading them is the King of the Wild Hunt, the harbinger of war and despair. I know he seeks me, but I don't know why.
The King of the Hunt appeared again and appointed one of his wraiths to fight me. He exploited a weakness — the wraith was the specter of Leo.
The spectral sovereign appeared in the village of Murky Waters near Vizima. I'm certain his appearance heralds disaster.
The King of the Wild Hunt appeared in the Grand Master's vision. I now know that I'm not the only one haunted by fate. The ghostly king seeks Jacques de Aldersberg as well, and wants his soul perhaps even more than he wants mine.
I fought the King of the Wild Hunt for the soul of Jacques de Aldersberg — in the Ice Plains, I defeated the specter.

This journal entry is given by reading the book The Wild Hunt.

During his final conversation with Letho, Geralt recalls his forgotten memories, remembering that Eredin found him and Yennefer at the Isle of Avalon after Ciri rescued the two from the riot that took place in Rivia. The Hunt attacked Geralt and Yennefer soon after, taking the sorceress captive after laying waste to the island.

Geralt had began searching for Yennefer, along the way he gathered the witchers of the Viper School and engaged the Wild Hunt in an attempt to rescue her but the Hunt far outnumbered them. So Geralt offered his soul in exchange for Yennefer's, to which Eredin agreed without hesitation.

According to Nordlings, the Wild Hunt is a procession, or rather a cavalcade of skeletal horsemen. They rush across the sky on the bony remains of steeds. Clad in rusty remnants of armor, they wear jagged swords at their waists. Like comets, the Wild Hunt is an omen of war, which has been confirmed beyond all doubt.
The spectral cavalcade ventures out in search of victims every several years, but its harvest was never as rich as just before the last war with Nilfgaard, when over twenty souls went missing Novigrad alone after the Hunt passed through. Curiously, elven and dwarven legends make not the slightest mention of the Wild Hunt.

Developer CD PROJEKT RED's characterization of the King of the Wild Hunt taken from the monsterbook, which was enclosed with the Collectors Edition of the computer game The Witcher for Poland, Hungary and the Czech Republic:

"This powerful being leads a retinue of wraith raiders in their mad rush across the sky. The Wild Hunt, like a comet, is considered an ill omen, a harbinger of disaster and war. The King of the Wild Hunt is an unusual opponent, if only because he is from another world — a fact well known to Sapkowski's fans.

"When we decided that the King of the Wild Hunt would appear in the game, we knew he had a serious part to play. From beginning to end, this nightmarish ruler appears on Geralt's path as an oppressor and portent of misery. The King of the Wild Hunt is linked to the forces of Destiny: he hovers just outside the main narrative, only appearing to remind the witcher of painful events or to provoke difficult discussions.

"Our protagonist's most powerful opponent is thus one of the game's most important and mysterious characters. The King of the Wild Hunt wields a scythe — an attribute of death. Beneath his ragged robes, he wears elements of an ancient suit of armor. The ornaments on his clothing and crown evoke associations with flesh—eating maggots."

Astride the horse skeletons sat skeletal riders wearing rusty plate armor and chain mail, shredded coats, and dented and corroded helmets adorned with bullhorns and headdresses of ostrich and peacock feathers. Beneath their raised visors glowed the specters' bluish eyes. Their tattered banners rustled. At the head of the demonic cavalcade galloped an armed wraith, a crown upon his helmet, around his neck a pendant beating rhythmically against the breastplate.
The Tower of the Swallow

Legends and myth about the Wild Hunt have origins in ancient Northern and Central Europe folklore, in our real world. According to myth, the Wild Hunt is a hunt or chase of spirits and other supernatural beings, all completed with hounds, horses and huntsmen.

It represents an omen of danger, misfortune or catastrophe, or simply the personification of human fear. It's also cited in cinema, music and literature.

A silver sword may not be enough to defeat this foe.

A sketch of the King of the Wild Hunt 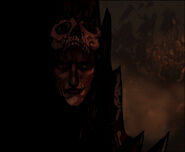 In a cutscene of The Witcher 2

The King as he appears in the Witcher 3
Čeština Deutsch Español Français Magyar Italiano Polski Português do Brasil Русский
Community content is available under CC-BY-SA unless otherwise noted.
Advertisement