School of the Cat

The Witcher 3: Wild Hunt
Kiyan was a witcher from the Cat School who was abducted by a mage called Ireneus var Steingard. This mage performed experiments on the witcher, turning him into a crazed being known as Mad Kiyan. He was possibly possessed by a demon, as referenced in the laboratory notebook.

Kiyan's curriculum vitae cannot be reproduced without significant gaps in the story since the witcher didn't use a journal or diary, but there are certain notes scattered around Velen and Novigrad that help to shape a picture of Kiyan's last days as a witcher.

According to these notes, the chronology began with Kiyan taking on a contract issued by Prince Adrien of the Sea Cats which consisted of killing the participants of an expedition led by professor Sigismund Gloger to find a treasure in Est Tayiar. Kiyan fulfilled the contract and then departed aboard the ship Flying Stag, despite being offered a secure post as Adrien's bodyguard.

On this ship, Ireneus var Steingrad had bribed the captain to share a cabin with Kiyan so that he could kidnap the witcher. The mage took notes on Kiyan's actions and then conjured up a storm to open a portal to undisturbedly carry the witcher off to his laboratory below Novigrad. Eventually, Steingard succeeded, even though the storm was stronger than expected and wrecked the Flying Stag, killing the crew.

Kiyan was then misused by Steingard and had been the subject of cruel experiments to test the physical and mental endurance of witchers. He was also interrogated and forced to reveal secrets about witcher training, and the Cat School of Witchers in particular. Steingard was pleased that Kiyan confirmed his theories: that the Cat School has elven origins. Kiyan's body survived the excruciating treatment, however, his mind was overwhelmed by the procedure after four days.

Ireneus var Steingrad continued his study regardless of this fact, turning the former witcher Kiyan into a crazed and tormented shell of his former self, driven only by immense pain. This version of Kiyan, Mad Kiyan, can be found in the abandoned laboratory below Novigrad's Temple Isle, where Geralt of Rivia encounters it. Here, the former witcher can be defeated and killed, relieving Kiyan from his fate.

Mad Kiyan: The demise of a witcher[edit | edit source]

Mad Kiyan is the crazed and possibly possessed version of the witcher Kiyan of the Cat School. The mage Ireneus var Steingard captured and performed experiments on Kiyan in his laboratory below Novigrad, tormenting both his mind and body beyond recognition. Mad Kiyan is thus an insane shell of the witcher only driven by immense pain and the urge to kill intruders.

Geralt of Rivia can encounter and relieve him from his suffering in the abandoned laboratory below Novigrad. However, Mad Kiyan can prove a serious threat to Geralt since even though the mind of a human being is no longer inhabiting Mad Kiyan's body, his skills in battle remain. Mad Kiyan can use Signs consisting of a bubble of Quen, a version of Igni and Aard. His blows with a Moonblade are fast and can cause bleeding.

Despite all these skills in battle, Mad Kiyan's vocabulary is restricted to muttering "No good. No evil. Only pain.," "seems you are bleeding," and "This is not the end." due to the absence of a regular human mind through the excruciating treatment by Ireneus var Steingard. 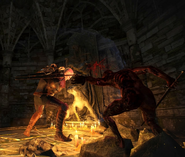 Retrieved from "https://witcher.fandom.com/wiki/Kiyan?oldid=523417"
Community content is available under CC-BY-SA unless otherwise noted.