Witcher Wiki
Register
Don't have an account?
Sign In
Advertisement
in: Creatures, The Witcher Chapter V, The Witcher bestiary
English

A koshchey is created through rituals such as Alzur's Double Cross or Fregenal's Triangle within a triangle, vile rituals known to some sorcerers. It is a member of that infamous group of gigantic beasts that can cause destruction on a massive scale while killing droves of people. Neither a crab nor a spider, it is tough as nails. Even a witcher might find the soft meat inside hard to get at. The most well known Koschey was created by Alzur's double cross, the Viy of Malibor.

The first koshchey was created by an ex-druid called Fregenal using either the Triangle Within a Triangle or Alzur's Double Cross and destroyed by Visenna using the Mirror Effect spell.

A mythical creature born of magic; only a mighty mage who knows Alzur's work can summon a koshchey

Resistant to most effects

Koshchey heart
In the game, Geralt encounters the koshchey during one of the boss battles. It is a formidable foe and there is no escape from its chamber other than killing the beast.

"What, in your opinion, is the best way to describe a koshchey?
Death. I'd call it death."

Developer CD Projekt's characterization of the koshchey taken from the monsterbook, which was enclosed with the Collectors Edition of the computer game The Witcher for Poland, Hungary and the Czech Republic:

This monster owes its name to Russian folk tales, in which Koshchay the Immortal is a murderous sorcerer who renders himself immortal by concealing his life's essence inside an egg. He does eventually perish — when the egg itself is shattered. In Sapkowski's short story A Road with No Return, the koshchey is a nearly immortal monster, or at least one that proves extremely difficult to kill — all by virtue of having been created through a magic ritual known as Alzur's Double Cross, which also made the beast enormous in size. In the story, the protagonists barely manage to kill the creature: in the game, Geralt must face this challenge alone.

While working on the concept art and model of the koshchey, the artists looked to the animal world for inspiration, as they had in creating the kikimores. Sapkowski describes the beast as possessing the features of an arthropod — half-arachnid, half crustacean. It moves surprisingly fast for its size and sudden strikes of its forelegs would surely instill terror in anyone suffering from arachnophobia.

Korin turned to look. From behind the rubble, about a hundred paces away, emerged spidery legs with lumpy joints. A moment later, over the pile of stones came a torso, minimum six meters wide, flat as a plate, clay-colored, rough and covered in barbed growths. Four pairs of legs strode forward steadily, dragging the bowl-like corpus the scree. The fifths pair of legs was disproportionately long and armed with huge pincers studded with sharp thorns and spikes.
Something Ends, Something Begins 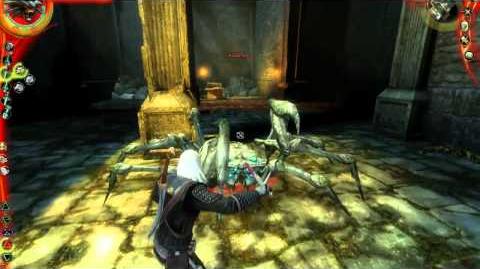 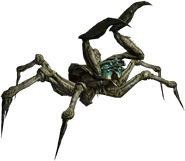