Witcher Wiki
Register
Don't have an account?
Sign In
Advertisement
in: Deities, Romance cards, The Witcher characters,
and 2 more
English

Lady of the Lake (nymph)

The Lady of the Lake is a powerful being, considered by some to be vila or nymph, worshipped by both vodyanoi and humans in places of chilvalry like the surroundings of Vizima in Temeria and the whole duchy of Toussaint.

The Lady of the Lake is worshipped by both the inhabitants of Murky Waters and the Vodyanoi with whom they grudgingly co-exist. She spends her time in a shallow, lily-pad filled covered inlet on Black Tern Island and can be consulted there on various matters relating to Destiny, her servants, quests for the Holy Grail and the relations between the locals.

Even goddesses get lonely. It is tough being the object of adulation and reverence. While most locals will tell you that they love the Lady, they would never dream of actual physical contact with her. In this regard, Geralt has no such qualms and can generously provide companionship of the more mundane kind.

To obtain the dialog option to romance her, Geralt must first speak to the Hermit after speaking to her and ask him about the grail. Failing to do so makes the romance option unavailable. To get the romance card, Geralt must first tell the Lady of the Lake that he [has] had "a revelation and [wishes] to embark on a mission". This will cause the Lady's hackles to go up and she'll stop him then and there (having only just told him that she takes a dim view of grail quests), but then the witcher says claims it was only "A jest..." and they continue their conversation.

She gets around to the fact that it is lonely being a goddess and while she is fully aware that her subjects may lust for her, they would never dare act on those feelings. She tells the witcher that he should compliment her, so he does, in a fairly lame manner, which she is quick to point out. Finally he gets an inspiration and decides to compliment her ass, saying it puts others to shame. This amuses her greatly and they finally get to know each other better.

If he persists with the quest "of paramount importance" conversation, and it does initially sound noble, the Lady knights him "Sir Bonehead" and dismisses him from her sight, none too fondly. Geralt can then still speak with her, he can even backtrack on the grail quest, but no sex. And she tells him so, saying "you know not how much you have lost".

On an island in the middle of the lake I encountered a supernatural being known as the Lady of the Lake. She is a nymph or a vila. Both the inhabitants of the nearby villages and the monsters of the lake worship her.
The Lady appointed me her champion and gave me a silver sword. Thus was I admitted into the ranks of the many noble knights who have served her over the centuries. The Lady predicted that the sword she gave me will prove important as I pursue my mission.
I left Murky Waters and returned to Vizima. I have a feeling the Lady of the Lake's domain was the only place where I might have found peace. What a pity.

These are her more active servants, not mere worshipers, the Fisher King and the Hermit. It is the Hermit's duty to the Lady to guard over the kurgen of the knights who died defending her honor.

Geralt can meet her again in the second expansion for The Witcher 3: Wild Hunt, during There Can Be Only One secondary quest. After he fulfills five chivalric virtues and defeats the Hermit in a fight, she gives him Aerondight and tells him that she hopes that this time the witcher won't lose it again.

Also during early conversations with first Guillaume de Launfal and then Anna Henrietta it is said that Lady of the Lake gave true chivalry to Toussaint and it was also she who cursed sir Luis Alberni, once proud nobleman who violated his vows, into becoming the giant named Golyat.

Geralt had first encountered the Lady of the Lake when his search for what had been stolen from Kaer Morhen took him to the village known as Murky Waters. There a mysterious female being dwelled in the murky depths of the village's namesake waters and watched over the residents living on the shores. Such was their esteem for their underwater guardian, they erected a monument in her honor. The Lady of the Lake once had many knights in her service, but they had all died, as valiant knights tend to, during campaigns in far-off lands. She now lived in near solitude, so was glad to accept Geralt's company, the witcher being someone she liked and respected.
Once the witcher had believed the Lady of the Lake was some kind of local goddess, but their reunion at Lac Célavy made him realize she did not dwell only in Murky Waters. Instead, the Lady of the Lake calls home any place where virtue and chivalry are honored.

Legend of Knight and The Lady[]

According to legend, Golyat had once been a knight who violated his vows, for which he was punished by the Lady of the Lake. Transformed into a giant, he fled into the mountains and would only descend into the inhabited lowlands when hunger forced him to it. There's no knowing how much truth lies in that legend, yet it is incontrovertible fact that this dangerous giant gobbled up shepherds and sheep alike, and was so widely feared, governesses used him to scare children into eating their vegetables.
Though he came across as a wild, unthinking beast, Golyat used simple tools and any item could turn into a deadly weapon in his powerful hands. When fighting Geralt, Golyat wielded a millstone, making his every blow truly crushing. Luckily, Geralt already had some experience slaying giants and made quick work of Golyat as well, with the much appreciated help of three knights - Milton de Peyrac Peyran, Palmerin de Launfal and Guillaume de Launfal.

Virtually every knight errant in the duchy is a servant of Duke and Lady but the one and only being truly bound to her by duty is a certain Hermit at Lac Célavy who is guarding the five chivalric virtues. There is also the Fisher King but he is just collecting herbs and transporting worthy folks on islet with his boat. 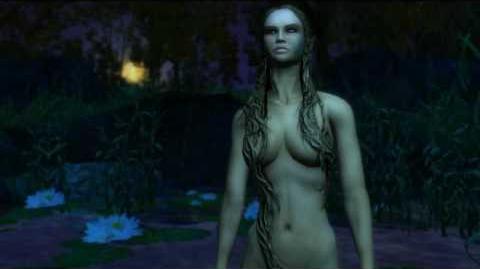 Lady of the Lake Full Story

The Witcher 3 Blood and Wine - Lady of the Lake Cameo 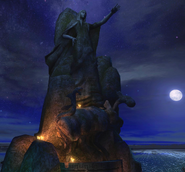 Lady of the Lake's altar on the Lakeside near Vizima 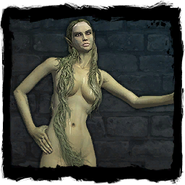 Geralt with the Lady of the Lake

Lady of the Lake's full render