Witcher Wiki
Register
Don't have an account?
Sign In
Advertisement
in: The Witcher locations, The Witcher Chapter IV
English

On the southern shore of Lake Vizima, north of Murky Waters

The Witcher
The lakeside is where Geralt unexpectedly finds himself after his near fatal encounter with Princess Adda at the end of Chapter III. Luckily for the witcher, Triss managed to transport him some distance from Vizima and away from danger in the nick of time.

After his abrupt landing, he witnesses the locals watching a rather spectacular mirage rising above the lake and is greeted by a rather curious and chatty young girl, who fills him on on all the recent goings-on. Also in the vicinity is a naiad, a servant of the Lady of the Lake swimming in the shallows, and a friendly vodyanoi priest worshipping at the Lady's altar.

In the evenings, a light breeze from the lake ripples the waters of small inlets, the Fisher King gathers his nets, and the few villagers come to watch the mirage of the underwater city, seen above the lake's surface thanks to the unusually clear waters, the light of the moon and a little optical magic. There is also a cave in the area, a refuge for elven fugitives who live in peace alongside the inhabitants of the nearby village. 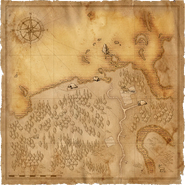 Map of the Lakeside