Witcher Wiki
Register
Don't have an account?
Sign In
Advertisement
in: Witchers, Blood of Elves characters, Time of Contempt characters,
and 7 more
English

Nathaniel Parker (English) in The Witcher

The Witcher
The Price of Neutrality premium module
The Witcher 2: Assassins of Kings (dream)
The Witcher 3: Wild Hunt

The Witcher: Of Flesh and Flame (mentioned)

Lambert was a witcher from the School of the Wolf, active in the 13th century.

Trained by Vesemir, he was known for his biting tongue, and was often rude in conversation, particularly towards Triss Merigold, addressing her only by her last name, which irritated the sorceress greatly. He did not have much use for politics, a trait common to most witchers due to their code of neutrality.

He was described as being at the same age as Coën and one of the last witchers to be trained within the walls of Kaer Morhen.

Lambert was born to an alcoholic father who constantly beat him and his mother. Every night, they prayed for his death. One day, his father lost his way returning home from the tavern and stumbled into a Nekker's nest. Unfortunately, a witcher saved him and expecting payment, invoked the Law of Surprise which resulted in Lambert being given to him and was brought to Kaer Morhen.[1]

His final test was the Trial of the Medallion, Lambert was accompanied by a group of young recruits. Together they sailed across the pond which ended in one drowning to death. They navigated through the caverns when they ran into a cyclops named Old Speartip who slayed several of them including Voltehre. After climbing Troll's Head, they encountered a trio of rock trolls whom they managed to avoid. Upon reaching the Circle of Elements, Lambert retrieved his Witcher Medallion and proved himself worthy to set out on The Path.[1]

In 1232, Lambert was at a camp in the Kaer Morhen valley, dealing with an archespore problem, and protecting the keep from possible attackers.[2]

In the autumn of 1267, Lambert went to Kaer Morhen to wait out the winter, along with Vesemir, Coën and Eskel. Geralt arrived one day with Ciri, and wished to train her at the keep, which Lambert spent time helping with, especially in the ways of sword combat on the pendulum. After Triss Merigold arrived at the keep, he spent many a moment arguing with her, referring to her only as "Merigold", to her annoyance.[3]

Lambert appears in the main campaign of The Witcher, as well as The Price of Neutrality premium module. Despite not being fond of her, when Triss was sick and wounded after a fight with a wizard, Lambert cared for her helping to nurse her back to health. Vesemir suggests this might be because he feels guilty.

In The Witcher, he is wandering around the ground floor of Kaer Morhen or busy in the courtyard for the duration of the Prologue.

The young witcher I met at Kaer Morhen sure is quarrelsome and he has a biting tongue... He is rude, especially to Triss Merigold, who he addresses by her last name. I think at times he uses rudeness to express his fondness for someone.

In "The Price of Neutrality", he can be found staking out the ford nearest the camp, keeping the local archespore in check and making sure the unexpected guests do not suddenly try to enter the keep.

The young witcher is quarrelsome and has a biting tongue, though at times he uses rudeness to express his fondness for someone.

Lambert and another witcher, Berengar, appear in Geralt's dream at the beginning of the second game.

Lambert is back in the third installment of The Witcher Series and seems to have a deep seated jealousy towards Geralt, as Geralt is an extremely famous and beloved witcher, while Lambert considers his witcher status a cruel twist of fate, and is stuck hunting relatively benign monsters for people who hate witchers.

Like some of his fellow monster slayers, he dislikes the lack of choice he had in becoming a witcher; when he was a child, his father continually beat him and his mother until one day his father stumbled onto a Nekker's nest where a witcher saved his life. The witcher then invoked the law of surprise, demanding the first thing the father would see, yet not expect when returning home. Since that day, Lambert despises his lot in life but walks the path nonetheless, for he knows nothing else.

Geralt had a dream in the May of 1272, in which he practised training at Kaer Morhen. When he and Ciri walked down to the lower courtyard, they trained with Eskel and Lambert, or more specificially Lambert trained with Eskel, Vesemir with Geralt and Ciri with a training dummy.

During Geralt's travels looking for Ciri, he could encounter Lambert after taking an ekimmara contract. After they had slain the ekimmara, they got to chatting, and Geralt helped track down three members of Jad Karadin's band, Vienne, Lund and Hammond. After they hunted the three down, they hunted down Jad, and confronted him. Geralt could choose to help Lambert kill him or he could stay out of it.

After Geralt arrived back to Kaer Morhen, after investigating all leads on Ciri, with Uma, he went with Lambert to the Circle of Elements to repair the phylactery. On the way they encountered several problems, such as trolls and foglets. Lambert later participated in The Battle of Kaer Morhen.

If Geralt got to Lambert in time to save him from the Wild Hunt: Geralt and Lambert fought the Wild Hunt side-by-side, and both survived the battle.

If Geralt didn't get to Lambert in time: Geralt didn't arrive in time to save Lambert and so he died to the Wild Hunt. After the battle was finished they had a funeral in his honor.

If Geralt convinced Keira Metz to go to Kaer Morhen: During the battle Lambert was rescued from the Wild Hunt by Keira Metz and soon after got into a relationship with the sorceress

If destiny truly chooses which boys become witchers, then in Lambert's case it had made a twisted, cruel choice. After hearing his story, Geralt had to admit that Lambert had every reason to be unenthused about the lot fate had granted him.
A chance encounter of two witchers hunting the same ekimmara turned into a tale of old friendship, murder, and vengeance. The moral of the story? Don't mess with Lambert.
Though Lambert made no secret of his hatred for Kaer Morhen, when the time came to stand in its defense, he did so without a second thought.
If Keira didn't go to Kaer Morhen and Geralt didn't save Lambert in time:

Sadly, during the battle, Lambert found himself overwhelmed by enemy forces. Relief came too late and he was cut down by the Wild Hunt's soldiers.

If Geralt convinced Keira to come to Kaer Morhen:

During this battle, he came within a hair's breadth of losing his life. Luckily, Keira arrived in the nick of time and together they held back his attackers.
It just might be that Lambert and Keira's later (and somewhat unexpected) relationship came about as a result of that moment, when they fought for survival at each other's side. It is also possible it was a simple matter of two attractive people taking a liking to each other. At any rate, only time could tell what would become of the couple.

Who is Lambert? - The Witcher Lambert - Witcher lore 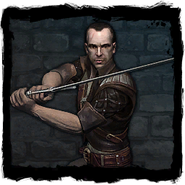 Concept art for Lambert in the Witcher 3