Twitter
IMDb
Reddit account
Lauren Schmidt Hissrich (born 1 August 1978)[1] is an American TV producer and screenwriter from Ohio. Known from her work in The Defenders or Daredevil TV series, she was announced as the showrunner and executive producer for Netflix's The Witcher in late 2017.

Work on Netflix's The Witcher[]

In following months from the announcement Lauren started to publish show-related miscellanea on her Twitter, including maps of the Continent with pinpointed locations and character descriptions. She said to have read and play Witcher-related stories long before receiving a proposition of work on the series.[2]

In April 2018 she set on a week-long trip to Poland, where she met Andrzej Sapkowski in Łódź and CD PROJEKT RED studio in Warsaw as well as visited several touristic and historic locations in the country, including the Ogrodzieniec Castle which would be later chosen as a filming location for Battle of Sodden Hill related scenes.

Apart from working on the show, she visited fan convents and continued to publish behind-the-scenes photos and lore-containing tweets.

Showrunner Lauren Hissrich Explains the World of The Witcher

Writing the Witcher with Andrzej Sapkowski and Lauren Hissrich Netflix 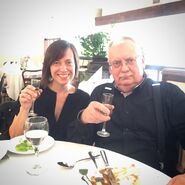 Lauren Hissrich and Andrzej Sapkowski in a restaurant

Lauren and Andrzej in Łódź 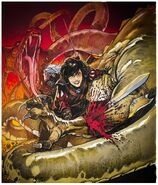 Lauren as a Wolf School witcher, by Tomasz Bagiński

Lauren in her leisure time