Edit
watch 06:10
'The Witcher' Lore: The Prophet Lebioda History
Do you like this video?
Play Sound

Deceased (eaten by a dragon)

King of the Universe (by Toussaintois)
Saint

Lebioda was a prophet whose visions and parables are contained in the Good Book of Prophet Lebioda's Wisdom.[1] He became legendary for his goodness, wisdom, and modest peaceful ways.

As he became well-known, a cult began to form around him. More and more people started following his teachings with some of them becoming his pupils, as was the case with Saint Plegmund who brought his master's words to Toussaint.[2] He was seen doing miracles, and in short time, his words and deeds converted the whole duchy along with Duchess Caroberta who ordered both a temple in Beauclair and a monument on the west bank of the Sansretour River to be built.[3][4] Lebioda himself visited Toussaint at least once to hear prayers of the faithful.

His wisdom reached even the edges of the Continent far as Kovir and Poviss where it spread thanks to King Esterad Thyssen's wife, Queen Zuleyka, who lived most of her life according to the prophet's teachings.[1][5]

He died, eaten by a dragon, which he attempted to stop harassing Kaedweni villagers near Ban Ard. The remains of the prophet, recovered from the feces of the creature, were collected by his students and interned in the sarcophagus in the Novigrad's Great Temple. On some holidays, the faithful are allowed to kiss the relic.[6]

He is not only revered by humans but also by several assimilated dwarves.[7]

Even the Cult of the Eternal Fire follows some of Lebioda's parables.[8]

The story of how the Prophet Lebioda's bones were recovered is quite amusing, especially when you consider that they are supposedly taken out of his sarcophagus on certain festivities, and the pious given the honor of kissing them. I will for the moment refrain from repeating the story, as tales of combing through dung, even dragon dung, are not very well suited for mealtime conversation. 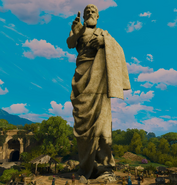 Lebioda with gloriole in Toussaint.