Witcher Wiki
Register
Don't have an account?
Sign In
Advertisement
in: Humans, The Witcher characters, The Witcher Chapter I,
and 2 more
English

Deceased (killed by the Professor)

Leo was one of the many young orphans of the Second Nilfgaard War. Vesemir took him under his wing at Kaer Morhen and began training him as a witcher around the year 1264. Leo was not a full witcher, as he had not undergone the mutations, but he was intent on working on his craft. He was eager and seemed to want to be a witcher.

Leo was one of the orphans of the war that was found by Vesemir and started training to become a witcher around the year 1264. As part of this, while he was not mutated, according to Eskel he did go through with the Choice trial. Vesemir also had Leo train with both Eskel and Lambert as he grew up. One instance of the former was witnessed around six years later by Geralt after his return and Leo himself mentioned training with Lambert, who was said to always beat the boy but encourage him on his potential each time after he did.

A few days after the return of Geralt, Salamandra attacked Kaer Morhen. Towards the end of the battle, Leo was fatally shot by the Professor and died in Geralt's arms.

He was later buried near the keep, along the Gwenllech River's bank.

Leo is the youngest of Kaer Morhen's residents. He's not a full witcher — though he has completed his training, he was not subjected to mutation. Leo comes across as a hot-headed whelp, but is also kind-hearted and good.
It appears that Leo is somewhat fascinated with me. He has heard the ballads about the White Wolf and now holds me in high regard.
Leo was killed by the Professor, one of the leaders of the assault on Kaer Morhen. The boy was too hasty and inexperienced. I wasn't able to help him, even though I was right beside him.
I saw Leo's face again — this time on a specter. It reminded me that I failed in the cellars of Kaer Morhen.

In The Witcher 3: Wild Hunt, he was mentioned in conversations with other characters, such as one with Vesemir. He also had a cenotaph to the south of Kaer Morhen. Upon its discovery, Geralt will have said: "Leo's grave... A senseless death, could've been avoided." 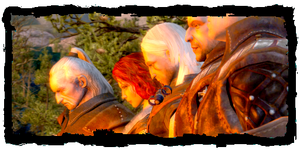 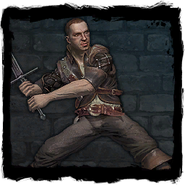