Edit
watch 08:54
Witcher Lore: Leshens
Do you like this video?
Play Sound

A leshy (Polish: Leszy, in English sometimes spelled Leshii, Leszi, or Lessun), also known as leshen or spriggan in CD PROJEKT RED's The Witcher franchise, is a forest monster that is described as something that "lives only to kill". When they kill something or someone, they do not leave much for any carrion eaters.

If a human spied a leshy in the forest, it was most likely that he had lost his way. Folk tales told that to find his path again, he had to turn all his clothing inside-out.

In Wiedźmin: Gra Wyobraźni, leshy is described as a forest-dwelling, iron-resistant, highly intelligent monster. For unknown reasons, many peasants consider him to be a spirit that protects the forest. In reality, it is a very dangerous creature that hunts woodland creatures and lone wanderers. It has the ability to polymorph.

In its natural form, it is a wildcat-sized creature that looks like a cross between a wildcat and a bear, with mighty fangs and sharp claws. It mostly lurks among the tree branches, from which it quickly jumps on its victims. It usually devours the whole prey. Its mightiest weapon is the ability to shift shape. It can morph into a humanoid being that looks like a harmless, old man or into a tree branch that is practically identical to real ones.

In this graphic novel for The Witcher 2: Assassins of Kings, Geralt of Rivia starts his adventure by getting a contract on an ancient leshy from the castellan Lazare, but the monster later turns out to be something else.

Leshen resin
Leshen mutagen
Monster bone
Fiber
Leshens in The Witcher 3: Wild Hunt are ancient and powerful forest spirits. Possessing a deer skull as a head and tree-like limbs, a leshen can call for aid from crows or a pack of wolves.

This version of the Leshen also appears in a collaboration with Monster Hunter: World. In it, Geralt ends up in another world, where he discovers that a Leshen is trying to take over an ancient, monster-infested forest. As the area's resident monster hunters work to keep the more dangerous wildlife away, Geralt seeks to uncover the Leshen's presence and defeat it.

Humans have long been fascinated by the wild wood — living in its vicinity was the source of tales about creatures ferocious and benign, friendly and hostile. As they started to settle deeper and deeper into the forests, respect for the unknown diminished. Lumber was gathered, stone abodes were built. As the pestilence that was humanity grew bigger, so did the forest's and its inhabitants' wrath.
At the heart of the forest lies a secret. In a place born of darkness and primeval nature, resides a mighty and terrifying guardian. Immune to human steel, it is believed the leshen is nature's way of protecting the forest and the animals that live within it from the threat humans started to pose upon their ravaging expansion deeper into the lands.
Along with the animals it commands, the leshen became a force to be reckoned with. Sometimes worshipped, this creature can heal other woodland animals and summon nekkers or crows to protect the forest. Its attacks are slow, but deadly — be cautious not to get shackled by its underground roots.

We never hunt in these woods. Never. Even if it means the whole village starves.
– Mulliver, ealdorman of Hoshberg in lower Aedirn
Leshens dwell in dense, primeval woods. Fiercely territorial creatures, they hunt with stealth and cunning as their only companions. They use their inborn magic to control the plants and animals within their territory – and so, when stalking them, half the battle is merely getting near enough to strike. Leshens old enough to earn the appellation "ancient" wield advanced skills and tactics that make them particularly dangerous.

Leshens do not fight alone. They can summon swarms of crows to distract and harass their enemies, and even call upon wolves to fight with them. They seem to prefer nighttime and darker underground areas.

When facing a leshen, watch for them to dig their rootlike arms into the ground. This is a sign that they are commanding the roots to strike. This attack has surprising range, does heavy damage, hits a reasonably sized area and can only be foiled by rolling away from it. Leshens are slow but powerful melee fighters, and can cause serious injury if allowed. Dodge or roll away from the swipes of their claws.

They also have the ability to turn into a "smoke form"; they will raise both arms above their head and with a swirl of dark smoke, disappear. Note while doing this any attacks on them will be at least partially reflected, and will break Quen. Moon Dust bombs can prevent them from transforming despite the bestiary not listing it as one of theirs weaknesses.

They have been seen to be very, very vulnerable to a series of Fast Attacks and will, without fail, go into Smoke form after taking 4 or 5 hits. This will also teleport them to a random location but they will stay in smoke form which is openly visible as a small moving cloud of swirling smoke, and attacking it does no damage until they appear. They won't attack while in smoke form, but if you're right next to them when they reappear they come out swinging.

Igni, and any bombs that can potentially cause fire damage, such as Dragon's Dream, are useful against leshens. While a leshen burns, it will be unable to defend itself.

Leshen can cross your path in The Witcher Adventure Game. This creature is very hard to defeat, level Gold.

To defeat them you need:

Failed Sword: Suffer 1 Death for each Sword you are short.

Scroll 1: Experienced hunters can hide from most dangerous woodland beasts, be they wolves, nekkers, even ekimmaras. But there is no hiding from a leshen.
Scroll 2: It is impossible to conceal one's tracks from a leshen. They cannot be fooled. At one moment, the forest stands still and empty... Then, out of nowhere, staring back at you from the darkness is a pair of dead, hollow eye sockets, burning with an unearthly blue flame.
Scroll 3: Although its claws measure three feet long and are sharper than a Mahakaman sihil, they are not what is to be feared most. The forest – that is a leshen's most dangerous weapon. It can be brought to life and bent to the monster's will.
Scroll 4: Tree roots sprout from underfoot, tangling and gripping your legs. The air thickens with dense fog, obscuring the pack of wolves now on your scent. It is extremely difficult to survive such an attack, and even more difficult to retain your sanity after the fact.
Chest 1: In some regions of the world, cults are formed around leshens. They are offered sacrifices, usually in the form of hares and birds, but sometimes human blood. Many legends have emerged of benevelont leshens that help hunters find prey, guide wayward travelers to safety, even rescue folk from bandit raids. Unfortunately, not a shred of truth can be found in such myths. In fact, leshes see humans as just another source of energy – a source for which their appetites continue to grow.
Chest 2: For years, scholars have debated the true nature of leshens. Although most bestiaries categorize them as relicts, many experts question this classification. Some consider them a being born of black magic, perhaps even necromancy. Others contend that they are demons, akin to djinns or draugs. Autopsies of leshen corpses would undoubtedly shed light on the dispute. However, once slain, its body vanishes... All that remains is of the creature is a yellowed deer skull...
Chest 3: What should one do upon encountering a leshen? Fighting it is out of the question – unless you are an experienced witcher, of course. Naturally, the first instinct would be to flee. Unfortunately, leshens can move between trees at the speed of the wind, making escape nearly impossible. So what is the alternative? Hunters, druids, and elves all agree – any traveler who stumbles upon a leshen should fall to his knees without delay, draw a blade over his wrists, and close his eyes. If fortune smiles upon him, the leshen will be satisfied with the gift of blood and leave the traveler be... And perhaps his wounds can be healed before it is too late.

Leshen in The Witcher: House of Glass

Leshen in a promo shot 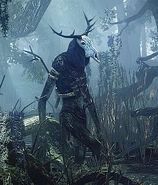