Lilies and Vipers is a quest in Chapter III of The Witcher 2: Assassins of Kings. It was added to the game as part of the Enhanced Edition and is only available on Roche's path. The quest involves getting to the bottom of some political conspiracy related to Foltest's children, Anaïs La Valette and Boussy La Valette.

There are multiple ways to finish the quest. At any point, you can simply present your current evidence to John Natalis and make an accusation, but this will yield less XP. After speaking with King Radovid in the Redanian camp area during the quest For Temeria!, Geralt and Roche see Brigida Papebrock being chased by some thugs. A conversation with Brigida ensues, and you can choose whether to help Brigida or say that you've got more important things to do. If you don't choose to help, you can still help her later by speaking to her at the main gate of Loc Muinne.

When you speak to Brigida at the main gate, she will ask you to escort her to a boat where she has arranged passage. You accompany her through a forest, where there are multiple ambushes, but the boatman is dead. You then question her. Your dialogue choices have no effect, and you will eventually get a letter signed by Baron Kimbolt showing his treason.

On taking the letter to Kimbolt, he declares it a forgery. You can test this by taking it to the scribe, who is just through the door to the main Temerian camp, and to the left. The scribe is drunk, so it's left to you to figure it out. Talking to the drunk scribe reveals a few cryptic clues. The correct use of his equipment (located in the room to the left of him) is as follows:

Players trying to work out the combination are strongly advised to use draft letters and to save before attempting the test. There is a finite number of draft letters near the scribe.

The letter is revealed to indeed be a forgery. On returning to Kimbolt, he asks for a favour. He wants you to investigate the letters carried by a messenger of Count Maravel. See The Messenger.

Upon accepting The Messenger, you will be directed to follow Count Maravel's mage. After being spotted by the mage, you must fight through Maravels soldiers, then some Nilfgaardian soldiers, and finally the mage himself. You may need to cast Yrden on one or more of the spots the mage repeatedly teleports to in order to catch him and inflict damage. On the mage, you find a letter which proves Maravel's guilt.

During Pacta Sunt Servanda, Count Maravel requests that you investigate a matter relating to Baron Kimbolt. If you accept, you can go and talk to some mercenaries. As you speak to them, they are attacked by Kimbolt's soldiers. To learn the truth, protect the mercenaries. The mercenary leader hands over documents revealing Kimbolt's plot to murder Anaïs and Boussy, and agrees to testify against him.

In the meantime, you can speak to both Kimbolt and Maravel of the other noble's guilt, but this does not do anything. You can also accuse them, but Geralt realizes they will kill him, and decides against it.

You can now speak to John Natalis. You can choose to accuse either Baron Kimbolt, Count Maravel, or both. Accusing either one will yield 500 XP, orens, and a Steel Sword while accusing both will yield 750 XP as well as a Medal of Distinguished Service to Temeria as a trophy.

The common folk say that shit happens to everybody. I would add that it happens to witchers especially. Our hero was wandering amidst the ruins of Loc Muinne when he spotted a youngish woman being surreptitiously but threateningly pursued by some armed rogues. The witcher stepped in and promptly found himself embroiled in a convoluted political affair. For the woman proved to be a nursemaid Roche had hired to look after Boussy and Anaïs. She could not have know the assignment would prove way over her head. Now forced to flee, she promised to reveal all she knew about the fate of Foltest's children if only Geralt would escort her out of the city and to the river.
Geralt kept his vow and accompanied Brigida to the river. Brigida also kept her word. She revealed that the Council of Regents had dispatched Foltest's children to Loc Muinne, where their fate was to be decided. The convoy had almost left Temerian territory when its commander received a letter from Baron Kimbolt ordering a change of route. Once on the new trail, the convoy was attacked by unknown assailants. Brigida had fled and knew little else of what befell Boussy and Anais, but she suspected the worst. She had made her way to Loc Muinne, with what hope she did not know. That, too, was where the aforementioned unknown assailants reappeared, clearly intent on killing the last living witness of their attack. And that was when Geralt had stepped in. Grateful for his help, Brigida gave our hero Kimbolt's letter ordering the convoy to change course, thus confirming her story. The witcher decided to speak with the nobleman and learn what had prompted him to issue the order. The search for Boussy had begun.
Baron Kimbolt claimed that the letter was a forgery and he could prove it. All his official correspondence was written on paper saturated with a substance that would turn the page blue when treated with an activator. The witcher could thus have the letter to the convoy commander examined alchemically. Though as it turned out, he would need to complete the procedure himself.
Geralt's experience concocting potions, oils and bombs proved useful, as he easily created the activating substance. The page turned orange, not blue. Not written on Kimbolt's paper, the letter was clearly a forgery. The witcher decided to revisit the baron to try to establish who might have tried to frame him.
After talking to Kimbolt, Geralt knew that he would need to investigate the Temerian nobles if he wanted to learn what had truly happened to Boussy and Anais. The powerful Baron Kimbolt and the diplomatic yet enigmatic Count Maravel seemed key to solving the mystery. Thus, the witcher continued to delve in the hope of finding evidence he could present to John Natalis.
If Geralt accuses both Kimbolt and Maravel:

As he laid open the schemes of the two Temerian magnates and began to learn bits and pieces of Boussy's and Anais' fate, the witcher drew closer and closer to concluding that all Temeria's highborn were guilty to some degree. After Foltest's death, each and every one had at least considered taking the throne, and some actually began to weave plots that would lead to their coronation. Geralt decided that both Baron Kimbolt and Count Maravel, through their scheming, had crossed the line into treason and brought misfortune to Foltest's children. The witcher presented his charges to Interrex Natalis, but as it turned out the arm of the law was not as long as one might have hoped. Given that the baron and the count had come to Loc Muinne with their household troops, Natalis lacked the men to arrest them both. He decided to charge and arrest Maravel, judging his guilt to be greater. What is more, he asked Baron Kimbolt to lend him his men-at-arms in case of trouble. Needless to say, the baron agreed eagerly. 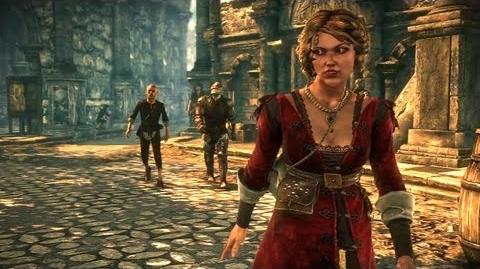