Lunar shards
Infused dust
Specter dust
Essence of wraith
Longlocks is a unique banshee in the Blood and Wine expansion. She's found at the top of her tower in the Land of a Thousand Fables.

Unlike the fairy tale, she cannot be rescued as she used her long hair to hang herself and her spirit will attack once Geralt enters her room.

Well, since it seems this hair won't be pulling up any knights in shining armor, might as well put it to some use.
– the last words of Longlocks.
Everyone knows love stories can have tragic endings, but few would think this also applies to princesses from fairy tales created to relieve a set happy ending over and over again. Longlocks had the misfortune of becoming just such an unlikely tragic heroine. After the duke's daughters grew up and the Land of a Thousand Fables went feral, Longlocks, whose prince never came and who suffered greatly from her loneliness, decided to hang herself by her own braid. After she died, her ghost stayed to haunt the castle in which she had awaited her suitor.

Longlocks is a banshee and should be fought in the same manner by using specter oil. She will also summon weaker armed corpses to assist her. 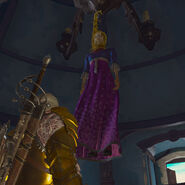