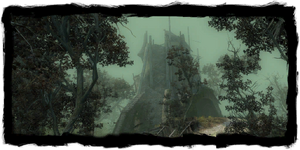 The Mage's tower is a decaying building in the north of the swamp outside Vizima. It is said to be cursed and breed monsters. Most locals shun it, if not for the monsters that abound in its vicinity, as a place of misfortune.

Geralt has one of his "show-downs" with both Azar Javed and the Professor just outside the door to the tower. Luckily he is able to enter before the fight which gives the witcher the opportunity to prepare.

In the swamp, a mysterious building stands out from its surroundings. A tall stone tower, its doors are locked and an eerie silence reigns in the area, as if even the birds are able to sense the strange aura that surrounds it.
The tower in the swamp was built by a mage who wielded extremely powerful magic. It probably holds incredibly valuable secrets. Unfortunately, it was locked by its creator and no one has been able to open it since.
"The Secret Gates" recounts the story of the mage who built the tower in the swamp. To erect the building on marshland, the sorcerer had to tame the elements of earth and protect the tower with spells. While delving into the secrets of magic, the sorcerer trifled with the forces of nature. The mage was betrayed by his beloved, a magical cataclysm ensued, catastrophe struck. The mage perished and all his works were sealed in the tower.
"Ain Soph Aur" is a tome that details in a very tangled manner where to look for the Sephirot — stones which will open the tower in the swamp. The first stone is with a wise person. The second will come with freedom. The third stone is in the possession of someone wealthy, while a merciful person has the fourth. Three other stones are guarded by a girl, a mother and an old hag, and they can be obtained through sacrifice and prayer. The eighth Sephirah is hidden underground in the swamp and guarded by death. The ninth must be obtained by fighting its guardian, while the tenth and final will be a reward for tenaciously seeking the truth. 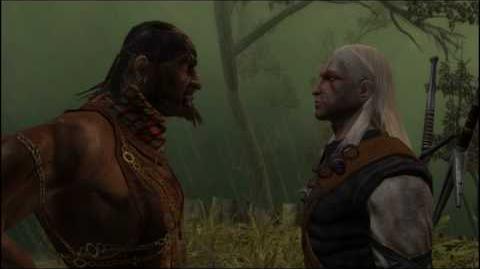 Battle at Mage Tower
Add a photo to this gallery

aerial view of the tower

the tower at day

the tower at night
Add a photo to this gallery
Retrieved from "https://witcher.fandom.com/wiki/Mage%27s_tower?oldid=515860"
Community content is available under CC-BY-SA unless otherwise noted.