View source
watch 06:59
Witcher Lore: The History Of Mahakam
Do you like this video?
Play Sound

Mahakam is both a vassal state and mountain range between the kingdoms of Temeria, Aedirn, Lyria and Rivia, and Sodden and is inhabited by dwarves, gnomes, halflings, and werebbubbs.

It is the biggest known exporter of iron and steel to the Northern Kingdoms and Nilfgaard, and many mines, foundries, forges, and ironworks are located there. Mahakam iron is famous for its quality and is considered to be the best in the world. Aside from its iron, Mahakam is famous for its weapons, especially gwyhyrs forged using advanced gnomish technology.

Although the kings of Temeria are titular lords of Mahakam, in practice its dwarves and gnomes keep the region largely autonomous as any foreign intervention would cause them to stop the supply shipments and flood the mines. The real power lies in the hands of local clans governed by a chosen elder who rules absolutely for life. During the reign of King Foltest, the position was held by Brouver Hoog.

Apart from the rich mines and breathtaking strongholds, the enclave is famous for its Ale Festival, which takes place every twenty-five years and attracts thousands of participants from every part of the world. This is the only occasion where the gates of Mahakam are opened to everyone. When the festival is ended, no one can enter the enclave, except with the permission of the Elder-in-Chief, who usually gift the visitor with the Leaden Ring, which allows him to stay in Mahakam as long as he desires.

Every Mahakaman law, tradition and custom is contained within the Foredwarves' Codex.

The current coat of arms and flag are based on the original Czech drawing (first one above). The second one is based on the drawing while the current is based more on the dwarven shields.

By the time of the 13th century, Mahakam was overgrown and the mountains full of werebbubbs.[2]

From 1263, following the First Northern War, a great amount of cheap Nilfgaardian goods started to flow through Mahakam into Temeria, greatly affecting the kingdom's economy. King Foltest of Temeria knew he couldn't shut the borders to Mahakam, as it would cause great outcry from the Merchant's Guild, and severely affect trade relations.[3] 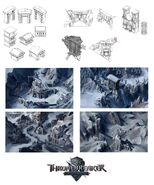