Malena is a quest from Chapter I in The Witcher 2: Assassins of Kings.

After starting the quest in Lobinden, the guards and Malena relocate to a cave outside Flotsam (near where you first enter Flotsam while running away from the Scoia'tael). You go into the cave (which is populated by many Nekkers. This fight can be difficult because there are many Nekkers and Geralt may be at a low level and will quickly be swarmed and killed. Use a few bombs to damage the Nekkers as they run toward you), and proceed toward the eastern end to find the bodies of two dead guards, full of arrows. Past the bodies are two ladders leading up to a locked trapdoor which can be used to enter the grounds of Loredo's residence during "Death to the Traitor!". After returning to the guards, either accuse Malena of being a Scoia'tael agent (she hangs and the quest ends), or listen to her, follow, and be promptly betrayed, ambushed by Scoia'tael. Use hit-and-run tactics to avoid being surrounded - the elves move almost as fast as Geralt.

During the fight Malena flees; she can be found outside the hospital ruins, hiding in a corner near the entrance. She may be killed, handed over to Loredo, or allowed to escape one more time.

Geralt was wandering around Lobinden when he noticed several guards harassing an elven woman - Malena. The guards seemed to be hurling grave accusations at her. Ever sensitive to displays of intolerance, the witcher decided to investigate.
The elf stood accused of spying for the Scoia'tael and leading guards into an ambush. It was a grave accusation and if she turned out to be guilty, she would be executed. Geralt decided to look into the case. He headed for the cave where the missing guards had gone. He wanted to find out more about their fate.
Geralt noticed bloody traces at the cave's entrance. He eased his sword in its sheath and entered the cavern.
Elf-made arrows were lodged in the soldiers' bodies. Therefore the accusations against Malena were true-the soldiers had been killed by the Squirrels and their bodies fed to the monsters. Geralt went outside, where the elven woman awaited under guard.
If Geralt chooses lie to the guards about the soldiers' fate:

Geralt decided to keep the truth to himself. He did not mention the elven arrows, blaming the guards' deaths on monsters. The soldiers left, their faces sour, and Malena thanked the witcher, proposing to meet him by the waterfall, near the elven ruins.
Geralt had high hopes for the rendezvous, and was taken by surprise by the Scoia'tael that attacked him from cover. Malena fled and the witcher fought desperately for his life.
The witcher escaped with his life. Leaving the ambush site, he wondered where to look for Malena. He had a few things to tell her.
If Geralt decides to kill Malena:

Geralt found the elven woman in the hospital ruins. The girl was trembling with fear, yet the witcher was merciless. For killing the soldiers and attempting to murder him, he exacted a capital punishment.

If Geralt decides to spare Malena:

The elven girl tried to find refuge in the ruined hospital, but she was captured. She was trembling with fear, yet our hero let her go. He forbade Malena from returning to Flotsam, however, and she never did.

If Geralt decides to bring Malena to Loredo:

Geralt found the elven woman in the hospital ruins. The girl was trembling with fear, yet the witcher was merciless and took her to Loredo's soldiers. I am not sure if we can speak of justice, but she was certainly punished for her misdeeds.

If Geralt is honest with the guards, but lets Malena defend her actions:

Geralt revealed his findings and hid nothing. Malena tried to explain herself. She asked Geralt and the soldiers to follow her and see the proof of her innocence.
The group was ambushed by Scoia'tael by the cliffs. The witcher and the soldiers had to fight for their lives.
Geralt saved the lives of many soldiers by drawing the attackers' attention to himself. The elves were repelled and the commander was grateful, as they managed to capture the murderess. Geralt received a reward for his efforts. Malena, in turn, was arrested, and though I know not her fate I suspect the worst, for I doubt Loredo would treat crimes against his subordinates lightly.

If Geralt decides that Malena is guilty:

Geralt revealed his findings and hid nothing. Malena tried to explain herself, but the warriors were implacable – they took her to the jail to interrogate her. From that moment, the soldier disappearances ceased. 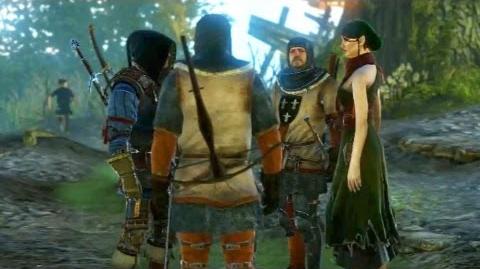 Malena (The Witcher 2) Full HD
Add a photo to this gallery
Retrieved from "https://witcher.fandom.com/wiki/Malena_(quest)?oldid=534614"
Community content is available under CC-BY-SA unless otherwise noted.