Edit
watch 11:53
'The Witcher' Lore - Monster Lore: Manticores
Do you like this video?
Play Sound

A manticore, otherwise known as a mardyacore,[1] is a giant beast with the body of a lion, bat wings, and scorpion tail. As a young witcher, Geralt fought a manticore. He also killed one in early 1267, near the town of Dorian.[2]

They are said to somehow use the lethal poison of the Bohun Upas in their stinger, and have an appetite that allows them to eat as many as 20 people per moon. Scholars at the Oxenfurt Academy believe that manticores have three rows of teeth, though this is not proven. Manticore's claws also never stop growing, so scratching various surfaces helps to keep them short[1], and easily slash their prey dead. They mainly inhabit mountain caves[3], as well as woodlands under cover.

Siegfried relates the story of how his father, Eyck of Denesle, died fighting a manticore when he first meets Geralt in the sewers. A letter from Patrick de Weyze can tell you same story.

In The Witcher 2, Geralt recalls that he fought an imperial manticore in one of his flashbacks while pursuing the Wild Hunt.

Strange, flying creature, mix of lion, bat and scorpion. It attacks from the air and uses its long tail ended with a poison gland to poison the opponents. Mantikora lives in high mountains. It's strong and demanding opponent, even though it's not bigger than a lion.
Mantikora attacks alone.

"There's a cruel man-eater in these parts, laddie. He fell on a knight riding along the road with nowt but a boy for company. They say the monster rent the knight's head right off — helmet and all — and split the horse's gizzards..."
"A dragon?"
"Nay, it's no dragon," said the one in the straw hat. "Tis said to be a manticore, or some such. The boy said 'tis a flying beast, awful huge. And vicious! We reckon he would devour the knight and fly away, but no! They say he settled on the road, the whoreson, and was sat there hissing and baring its fangs..."
...he saw the great tawny body being lifted up by the soldiers. The monster's bat-like wings and scorpion tail dragged inertly along the ground.
pgs. 10-11, Time of Contempt (UK edition) 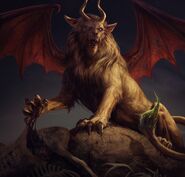 From Thronebreaker: The Witcher Tales 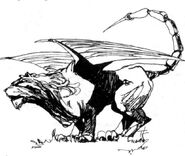 A manticore in Wiedźmin: Gra Wyobraźni, illustration by Tomasz Łaz.