Witcher Wiki
Register
Don't have an account?
Sign In
Advertisement
in: Humans, Blood of Elves characters, The Witcher 2 characters,
and 2 more
English

House of La Valette (by marriage)

The Witcher 2: Assassins of Kings
The Witcher 3: Wild Hunt
Maria[1] Louisa La Valette was King Foltest of Temeria's secret mistress from 1263[2] until his death in 1271[3]. It was widely rumoured that her younger two children: a son, Boussy and a daughter, Anaïs, were not the old baron La Valette's children, but Foltest's.

King Foltest moves to capture the stronghold of the rebellious Baroness La Valette. Additionally, it is revealed that she had one son with the "Old Baron", called Aryan.

I have chanced to visit the court of the La Valettes on several occasions in the past. Invariably, I was greeted and received in a manner befitting my fame and talent. Baroness Mary Louisa was a very comely lady, her beauty having fully blossomed, her hair dark, her lips sensuous. As with many women married to markedly older men, rumors about her were plentiful. Among them, one claiming that she had had a love affair with King Foltest himself, and that the monarch had fathered her younger children.
If Geralt manages to save her from the dungeons:

The witcher got a chance to behold the baroness in nearly all her beauty when he ripped her from the hands of a cruel torturer in the dungeon of her own abode. Mary Louisa La Valette eluded a terrible fate as they fled the underground prison, though they did so with the aid of an emissary of the Empire of Nilfgaard. The Nilfgaardian, however, was not helpful out of the kindness of his heart... 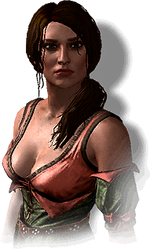 If Geralt does not manage to save her from the dungeons:

Mary Louisa La Valette managed to flee the cell in the dungeon of her own castle with the help of an emissary of the Empire of Nilfgaard. She thus eluded a terrible fate, but it can be said with some certainty that the Nilfgaardian was not helpful out of the kindness of his heart...

Mary Louisa appears in The Witcher 3, having taken up residence in Novigrad. The emblem of the La Valette family still flies high in her Villa. She is obviously supporting Nilfgaard in the Third War. She is also a friend of Morvran Voorhis and Ingrid Vegelbud.

Baroness Maria Louisa la Valette was the talk of Temeria in her time. This noblewoman had been King Foltest's mistress and even bore him two illegitimate children.
This caused quite the scandal and prompted several notable families to take up arms in revolt, only to be bloodily crushed by the king's forces, who took La Valette Castle during a hard-fought siege.

If Geralt has previously saved her son:

To the Baroness' good fortune Geralt of Rivia was with King Foltest at the time and saved her son Aryan from the fate that otherwise would have been his for having participated in the revolt.
Louisa la Valette thus had every reason to think quite highly of the witcher and her esteem became quite apparent the next time they crossed paths.

If Geralt has previously killed her son:

Sadly, the siege led to the death of the baroness' eldest son. Sword in hand he had fought to defend his mother's honour but fell to Geralt of Rivia, who was with King Foltest at the time.
No one could blame Louisa la Valette for harboring a deep-seated hatred for the witcher, a hatred which became quite apparent the next time they crossed paths. 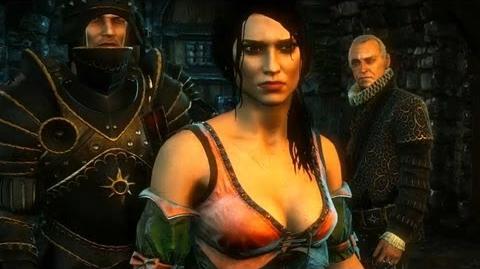 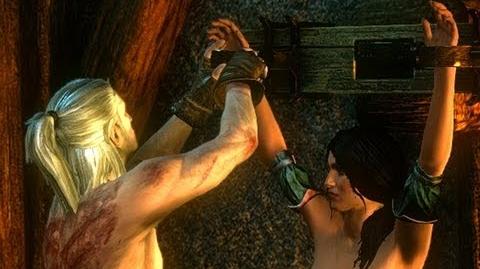