Edit
watch 07:15
'The Witcher' Lore: What is the Church Of Melitele?
Do you like this video?
Play Sound

from WitcherGeorge
The cult of Melitele was one of the oldest and, in its day, one of the most widespread cults from time immemorial. Practically every pre-human race and every primordial nomadic human tribe honoured a goddess of harvest and fertility, a guardian of farmers and gardeners, a patroness of love and marriage. Many of these religions merged into the cult of Melitele.
-pg 36 The Last Wish (UK edition)

Melitele Guard (some regions only)

Mother goddesses from various real-world mythologies
Melitele is a mother goddess worshipped in the Northern Kingdoms. The center of her cult is the temple in Ellander headed by the high priestess Nenneke.

The worship of Melitele is one of the oldest and most widespread religions. Original human cultures such as the Dauk and Wozgor worshipped her, and as time passed the worship spread to further lands and gained more followers. Melitele is considered by her followers as a patroness of fertility and birth; the guardian of midwives. Several of her priestesses made sacrifices to her, such as Iola, who took a vow of silence.

Adela was worshipped as an incarnation of the goddess for a period of time in one of the Viziman temples.

Notable members of the cult[]

Melitele, as a patroness of eternally transient nature, is presented in three forms: the beautiful young Maiden, the mature, pregnant Mother and the edentulous, wrinkled Crone. Under her second aspect, Melitele is the goddess of fertility, protectress of women pregnant or in childbirth; all women, regardless of their age, domicile or social position, have an esteem for her. Melitele is worshiped in most of the Nordling countries, primarily by the people closely connected with nature, like farmers, lumbermen or foresters.

The cult of Melitele have a chain of large and small sanctuaries spread throughout the Continent. If it is necessary to decide some matters on a nationwide scale, abbesses of the major centers meet in selected temples and discuss various issues; though this happens rather rarely and every major center remains, in point of fact, self-contained. Priestesses of Melitele often criticize priests of Kreve, argue and carry out disputes with them, however they can cooperate together on important issues. They also stay in good terms with druids or priestesses of Skelliger Freya, similar to Melitele in many respects.

The future handmaidens of the Goddess are entered into the novitiate at the age of fourteen, fifteen; adepts learn arithmetic, biology, botany and medicine, they also acquire general knowledge about the world. The closing ceremony of the novitiate, connected with admission into Melitele's priesthood, is organized on each Birke day. Young priestesses receive new robes and tasks from the abbess; usually it is taking care of the rural community or service in one of temples. Many of them travel around the world as midwives or healers specialized in illnesses of women and children, as wandering druidess, teachers and governesses.

In The Hexer TV series, Geralt visits Nenneke a number of times, meeting Iola and Ciri, too.

However, the series deviates severely from the books, for the temple of Melitele is ransacked and the priestesses slain on the orders of Falwick and Renfri.

The TV series writer also confused the goddess with the temple, as in one scene Falwick says that "Cirilla of Cintra is hiding in Melitele".

Cult of Melitele
"Among the numerous faiths of the Nordlings, the most widespread is the cult of Melitele, the goddess in three forms: young girl, woman and crone. Melitele is the Mother Goddess, extending her care over her children. Her following is not solely composed of women — men pray to her as well. Clerics of Melitele preach love and peace. They run many hospitals, shelters and orphanages."

The book "The Grand Triple" provides a journal entry for Melitele. There is also a quest called Melitele's Heart. One of the dwarves expresses his awe shouting "Melitele's tits!".

Great Melitele is, among others, the patron of love, marriage, fertility, nature and abundance. Her cult came to be through the blending of those beliefs many different races and cultures held about these aspects of life. Melitele's popularity never waned, and the phenomenon is explained in various ways. I think the causes are prosaic myself. The Cult of Melitele is a predominantly woman cult, and the goddess is, among others, the protector of women in childbirth. A delivering woman has to scream and, apart from the usual yells and empty promises that she will never give herself to another mangy man again, the woman has to call some deity for help, and Melitele fits the bill perfectly. Because women were delivering, deliver and will be delivering, the goddess Melitele does not have to worry about a lowering of the number of worshippers.

Shrines to Melitele are scattered throughout Velen. In the south of Velen, the image of Melitele has become mixed with that of The Ladies of the Wood, a syncretic blending of the two figures. This fits because even outside of Velen, Melitele is considered to embody the aspect of the crone (old woman) as well as the mother and maiden (young woman).

Melitele temple in an illustration from Wiedźmin: Gra Wyobraźni by Jarosław Musiał

the altar inside the hospital

the shrine in the swamp

the statue in the Trade Quarter 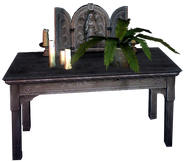