Memory of a Blade

Memory of a Blade

receiving a silver sword from Jethro

Prison Break
The Beast of the Sewers

q2122_slvswd
Memory of a Blade is a quest in Chapter II which basically begins when Geralt, to win his freedom from the dungeon, agrees to kill the cockatrice in the sewers. When he was thrown in jail, his possessions were confiscated by the City Guard, so he must be given a weapon to accomplish the task. Jethro gives our hero an alleged witcher's silver sword.

As Chapter II dawns, we find Geralt twiddling his thumbs, stuck in the dungeon with a bunch of losers after having been double-crossed by Mikul when he tried to enter Vizima using the letter of safe conduct from the Reverend. The situation seems a bit hopeless, but then there is a glimmer of hope: the captain offers anyone his freedom, who can kill a cockatrice currently stalking the sewers. The witcher immediately volunteers, but someone has beaten him to the punch.

At this point, the plot can go one of two ways, based on the outcome of a fistfight which is proposed to determine who gets to kill the monster. Either the Geralt "lets" the tough guy try his hand at killing the beast first by losing the fistfight, either deliberately or fairly, or he wins the right to fight the monster first. If the tough guy goes first, the expected happens and another monster-slayer will be required without delay.

The witcher basically finishes The Beast of the Sewers and then emerges a free mutant armed with a new silver sword. But where did it come from? Was it Berengar's sword? Questions abound, so our hero sets off to answer them by speaking to anyone remotely connected with the sword. His search leads him to Thaler, a gambler at The Hairy Bear, the gardener, Shani and finally Zoltan Chivay. Each conversation edging Geralt closer and closer to a positive ID on the weapon.

Based on what he overheard in the dungeon, Geralt begins by going to see Thaler, who sends him to the gambler, who in turn fingers the gardener, who positively identifies the sword as belonging to Coën, another witcher that Geralt once knew, mentioning that Shani also knew Coën. Shani fills in some of the gaps regarding Coën's fate and tells the witcher that Zoltan is an expert who could provide an appraisal. Finally, it is the dwarf who confirms that the weapon is indeed a good quality Witcher's silver sword and gives Geralt an Earth rune to use on it should he get the chance.

The Sword at Thaler's[]

Jethro spilled the beans.... He said they found the silver sword at Thaler's place. I wonder where the fence got it from... I need to visit him as soon as this business is over. I have to go and ask Thaler about the silver sword.

I talked to the gardener. He found the sword after the battle of Brenna. Interesting, Shani worked as a medic during this battle. Maybe I'll find out more about the sword? You visit at night and have to bribe her grandmotherI have to talk to Shani about the sword. (250 XP)

I left Vizima. I will not have the chance to get to know the story of the silver sword. 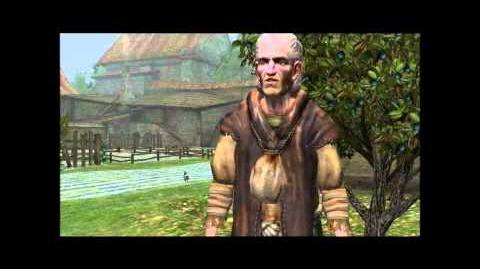