Mererid was Emperor Emhyr's chamberlain who, with a little help from Cledwyn the Barber, prepared Geralt of Rivia for an audience with the emperor of Nilfgaard in the Royal Palace in Vizima in the year 1272.

Also if Ciri became a witcher, he will lead Geralt once more to Emhyr, where he will lie to him about her death. 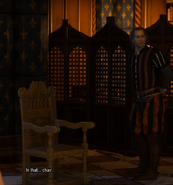 Explaining Geralt what a bergére is (type of chair)
Add a photo to this gallery
Retrieved from "https://witcher.fandom.com/wiki/Mererid?oldid=527362"
Community content is available under CC-BY-SA unless otherwise noted.