Witcher Wiki
Register
Don't have an account?
Sign In
Advertisement
in: Caingornese, Humans, The Price of Neutrality characters
English

The Price of Neutrality premium module
Merwin Ademeyn of House of Ademeyn is a character in The Witcher's The Price of Neutrality premium module. He is a recently appointed royal courtier who has pursued his elder sister Deidre all the way to Kaer Morhen, considering her to be a dangerous mutant. He wishes to force Deidre to relinquish her claim to the estate and titles she recently inherited from their father.

Geralt first encounters him at the Camp, presumably next to his lean-to, though from the looks of it, he prefers quite spartan accommodations. Sabrina's tent is luxurious beyond compare, not even considering the illusions she employs inside. Later, he can be found just west of Sabrina's tent, near the first of the mercenary campfires.

According to Merton Bringgs, the prince is in charge of the expedition in name only, while the sorceress is the one actually running things on a day-to-day basis.

Prince Merwin Ademeyn is a royal courtier and resides in Aard Carraigh. He has pursued his sister Deidre all the way to Kaer Morhen, considering her a dangerous mutant affected by the Curse of the Black Sun. He wishes to force Deidre to relinquish her claim to the estate and titles she inherited from their father. Ademeyn worships the deity Kreve and is considered a pious man. He is also a famous hunter, sharing this passion with Sabrina Glevissig. This may be why the nobleman and the sorceress understand each other so well. 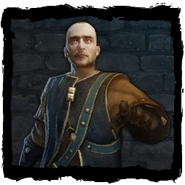