Lion of the North

Queen of Lyria and Rivia
Princess of Lyria

Meve was a queen of Lyria and Rivia and known for her wisdom and beauty. She was also distantly related to King Foltest and Queen Calanthe and maintained a friendship with the former. By 1267 she was a widow and had two sons, though she had a rather low opinion on them.

When the Second Nilfgaard War broke out and her small realm was conquered, she led guerrillas into many battles wearing her iconic white armor. In one such battle her face was wounded and she was left with disfiguring scars.

After the war with Nilfgaardian Empire, she was one of the negotiators of the peace treaty.

Born under the House of Raven, Meve was still a Lyrian princess when she married Reginald, the then king of Rivia, making her queen of both Lyria and Rivia,[4] a powerful although small kingdom situated right under the kingdom of Aedirn. She had two sons (Villem and Anséis) with her husband, but Reginald unfortunately died in 1259.[1]

As her sons were still too young to rule, the council decided to let Meve rule, believing the grieving widow would be easy to control while enemies of the kingdom decided to try and pounce on them while they were weak. Instead, both were met with a forceful command, with Meve leading her army to victory after victory, despite having had no military training herself, and beheading those at home who tried to get in her way. Before the winter even arrived, all her enemies had surrendered.[4]

During the second war against Nilfgaard in 1267, she, along with King Demavend III of Aedirn, King Vizimir II of Redania, King Henselt of Kaedwen and King Foltest of Temeria had a meeting in Hagge to decide what to do. The topic of the discussion was about the fate of Cintra and their inhabits. Although Ciri, the granddaughter of Queen Calanthe, was considered dead, the monarchs feared that Emhyr, the emperor of Nilfgaard, would marry her, thus becoming the ruler of Cintra. Foltest, Henselt, Vizimir, and Demavend came to the conclusion that the only way to solve the issue was to find Ciri and kill her, although Meve tried to convince the other monarchs to find another option. Fortunately, the plan failed, since Ciri was never found.

The same year, when she was returning to Lyria, she was victim of a coup organized by Count Caldwell and supported by Duke Ardal aep Dahy. Meve was arrested and confined in a tower, while her son Villem was crowned King of Lyria and Rivia, planning to surrender the country to Nilfgaardian troops. Count Caldwell was however sure that this situation wouldn't have lasted long since as Villem would have tried to free her mother soon after; he thus planned to murder Meve by sending his henchmen into her room, but fortunately, the Queen managed to escape the city thanks to the help of Gascon and Reynard Odo.[1]

In the meantime, Nilfgaardian Army commanded by Ardal aep Dahy invaded Lyria and Aedirn. Meve and Demavend clashed against the Nilfgaardians in the First battle of Aldersberg, which however ended in a terrible defeat for the Northern monarchs, as the city of Aldersberg was completely burned to the ground.

While Demavend took asylum in Redania, Meve started traveling through the Northern Realms, assembling a army in order to retake the country back from Nilfgaardian invaders. Together with what remained of her previous army and with some volunteers from Demavend's army, she headed in Mahakam, where she somehow gained Elder-in-Chief Brouver Hoog's trust, whom gifted Meve with a great amount of dwarven volunteers.

Angren and Battle for the Bridge[edit | edit source]

She then headed towards Angren, where Count Caldwell had been granted the title of Palatine. In the end, Meve defeated and killed Caldwell in the Battle of Tuzla Castle. When she was trying to exit from Angren, Meve was forced to make a detour through Ysgith; there, thanks to the help of Ivo of Belhaven, the queen killed Gernichora, a terrible monster who nested in Angren swamps.[1]

Still in Angren, Meve clashed against Nilfgaardian troops commanded by Morteisen in the Battle for the Bridge on the Yaruga. It was here that, erroneously believing Geralt and his company had helped fight back the Nilfgaardians to help her men, she proceeded to knight the witcher, officially making him "Geralt of Rivia" (not realizing he was already using this as his name).

Now leading a powerful army, she returned in Rivia, where she started whipping out the invaders from her country. Villem, who was aware of the fact that she couldn't have defeated her mother's troops, offered her an alliance, provided that he would've remained her heir to the throne.

If Meve acceptes Villem's condition: Although her own son stabbed her in the back and sold her own country to Nilfgaard, Meve finally forgave Villem and accepted his conditions.

If Meve doesn't accept Villem's conditions: Those conditions however sounded unacceptable to Meve's ears, and Villem was forced to head back to his castle empty handed, forced to fight in a war that he wanted no more.

If Meve arrests Villem: Those conditions however sounded unacceptable to Meve's ears and so was his treason: the Queen ordered her troops to arrest Villem and toss him in the dungeons, where he remained until his death.

After the meeting with Villem, Meve finally freed the city of Rivia in the Battle for Rivia Castle. She didn't manage to kill Ardal aep Dahy, whom escaped to the ruins of Aldersberg with what remained of East Army Group.

In the meantime, the Northern Realms defeated Center Army Group in the Battle of Brenna, which ended the war. Ardal aep Dahy, who was ready to fight back from Aldersberg, mysteriously died from poisoning.

One year later, she, along with the other monarchs, signed the Peace of Cintra, ending the senseless war that had brought nothing but death and poverty upon the land.

Meve's personal badge portrayed a lion rampant holding a sword of the Delens.[1] She also used royal standards: elongated flags in colors of her kingdoms which were flown in cities and castles where she stayed.[5]

Meve is a Northern Kingdoms leader.

Scroll 1: Princess Meve was the bane of every royal governess. Rather than knit, she preferred climbing trees. Instead of practicing scales on the harp, she sparred with her brothers using wooden swords. And in lieu of romance novels, she pored over the memoirs of decorated generals.
Scroll 2: It was decided that Meve should be married off as soon as possible. Alas, few men of noble birth were willing to ask for the hand of a scrappy sixteen-year-old with scratched knees and bruises every color of the rainbow...
Scroll 3: In the end, it was the King of Rivia, Reginald the Courageous, who claimed her hand. Despite not displaying a particularly keen intellect, he proved far wiser than Meve's governesses. Rather than attempt to tame the unruly princess, he simply fell in love with her for who she was.
Scroll 4: Sadly, their idyllic union did not last long. Reginald died but a few years later. Neighboring sovereigns presumed the newly widowed Queen would collapse under the weight of the crown; thus, even before the bells of mourning had ceased their tolling, they crossed the border into Rivia. Yet, what awaited the invaders proved a surprise most unpleasant...
Chest 1: At first, Meve rarely demonstrated the affections expected of a loving wife. Thus, Reginald sought advice from the noble ladies of his court, who were all in agreement: to win Meve's heart, a gift must be bestowed that would show the depths of the king's love. Alas... Meve proved rather selective. Without a word of explanation, she discarded the finest Ofiri tapestries, flung the sapphire-studded necklaces out the window, and splintered a Koviri lute against her chamber floor. Yet when Reginald presented her a suit of exquisite, gilded plate armor, well... That cold metal melted Meve's heart.
Chest 2: Meve possessed many fine qualities: keen insight, breathtaking beauty, and unrivaled bravery. Yet like everyone, she was not without fault. Greatest among them was perhaps her failure to grasp the nature of human weakness. She measured others by the impossible standards she set for herself, and hence quickly bonded with those of equally strong character. Those of a more "sensitive" constitution she held in disfavor – sometimes even contempt. As a result, her relationships with her sons was strained from the very start. This was especially true of her eldest – Villem.
Chest 3: Tucked away within the queen's castle in Rivia was a superbly stocked armory, where every manner of exquisite steelwork could be found: elven blades, specially cast Hawker flails... Yet of all the finely tuned instruments of death at her disposal, Meve most highly prized the Mahakam-forged sihil uniquely dubbed the "Sharp Bastard." When asked how the blade acquired such a moniker she merely replied with a heavy sigh. Evidently, the question brought old memories to the fore, both deeply intimate and somber. 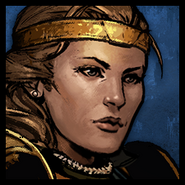 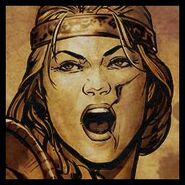 Meve knights Geralt
Add a photo to this gallery

Retrieved from "https://witcher.fandom.com/wiki/Meve?oldid=538634"
Community content is available under CC-BY-SA unless otherwise noted.