Witcher Wiki
Register
Don't have an account?
Sign In
Advertisement
in: Temerians, Humans, The Witcher characters, The Witcher Chapter I
English

The Witcher
Mikul is a Viziman guard posted at the Merchants' bridge near the Outskirts fishing village. He does not sound like the most educated of men, but appears to have earned the respect of his fellow (male) villagers in the Outskirts, and is now considered one of the most prominent citizens.

Geralt usually meets Mikul after being advised by the Reverend to gain Mikul's trust. After ascertaining that Geralt is indeed under the auspices of the Reverend, Mikul offers him the Buried Memories quest.

Mikul does not stay at the Merchants' Gate for the whole act. Part of the way through Chapter I, he announces that he is moving to the Miller's Gate. This is where he can be found thereafter.

"Mikul is widely respected because he has become a city guard, and that's quite a career for someone from the Outskirts. He seems lazy and lecherous. He cares little about the problems of the Outskirts and tends only to his own interests.
By day Mikul stands guard at the gate to Vizima." 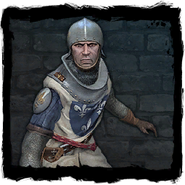