Witcher Wiki
Register
Don't have an account?
Sign In
Advertisement
in: Skelligers, Humans, The Witcher 3 bestiary,
and 2 more
English

View source
watch 05:16
The Life of Morkvarg The Werewolf - Witcher Tales - Witcher Lore - Witcher 3 Lore
Do you like this video?
Play Sound

Morkvarg was a notorious and cruel pirate. He and his Terror Crew sailed the seas around Skellige, pillaging and raping as they went and none seemed able to stop them. Morkvarg was said to fear nothing, except the wrath of the gods. In order to dispel that rumor as well, he and his crew sailed to Hindarsfjall to ransack Freya's garden.

There, they rounded up the priestesses and bound them, but the Arch priestess Ulve stood in Morkvarg's way. He cut her down together with the other clergywomen, but with her dying breath she uttered a curse upon him.

It turns out it was not the priestess who cursed Morkvarg, but was Einar, one of Morkvarg's crew members. Disgusted with the atrocities Morkvarg committed against the gods by defiling the garden, Einar transformed Morkvarg into a Werewolf using a cursed wolf pendant given to him by his father. The curse not only bound him to the garden for eternity, it also gave him an immense hunger that no food or prey could ever satisfy as it immediately turns to ash. Even trying to consume his own flesh would cause him incredible pain. If he is killed, he invariably is resurrected and returns to the garden where the cycle begins anew. 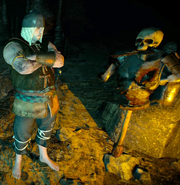 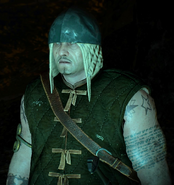