View source
watch 02:52
Roblox: DeepWoken - The Loop
Do you like this video?
Play Sound
Sub-Pages:
To meet Witcher Wiki's quality standards, this article or section may require cleanup.
Please help Witcher Wiki by editing the article or discuss this issue on the talk page

Hierophant of the Skellige Circle

Advisor to Bran, Calanthe and Crach

The Last Wish
Sword of Destiny
Something Ends, Something Begins

Mousesack[1] (Polish: Myszowór), also known as Ermion, was a skilled and intelligent druid, and also a good friend and advisor to King Bran Tuirseach of Skellige, as well as Queen Calanthe of Cintra. He had a thickset and robust appearance and wore a bushy beard.

The following is considered comics canon only and may contradict Andrzej Sapkowski's works.

Mousesack was the son of an unknown man from Skellige[2] and Manissa, a witch in the service of Fregenal, who was killed in self-defence by Korin, the future father of Geralt. Mousesack's father left Manissa when he was a small child. Not knowing that the warrior killed his mother, the young Mousesack befriended Korin and the druid Visenna, who took him to the druid circle of Mayena.[3]

Even though due to the plots of mages and kings the Mayena Circle was destroyed, Mousesack and two older druids were invited by the king to a Witcher Tournament which was to take place on a special arena. When the tournament turned into a massacre of witchers of the Wolf School, Mousesack helped Geralt, his childhood friend, escape.[4]

Mousesack was opposed to the arguments of Eltibald and Stregobor during a council of wizards in which he took part when they argued to consider the children born in the year of the Black Sun monsters.[5]

Mousesack was present at the feast organized by Calanthe to celebrate Pavetta's coming of age, accompanying Eist Tuirseach and Crach an Craite as part of the delegation from Skellige. He communicated secretly with Geralt by manipulating breadcrumbs on their plates to form runes. Both men felt the impending trouble of that evening — Duny's return, and Pavetta's power being unleashed — though neither knew the exact details beforehand.

When everyone at the interrupted feast finally arrived at accepting Duny's claim — thanks to Geralt's and Mousesack's intervention in the heated argument — and letting Pavetta decide whether she would fulfill it, Mousesack warned Geralt of the grave danger he felt mounting in the room through breadcrumbs again. When Pavetta's power was uncontrollably unleashed by seeing Duny being injured by Rainfarn, Mousesack and Geralt used their magical powers to try and put a stop to the rapidly escalating destruction.

When everything had settled again, in the early morning, Geralt and Mousesack did not draw attention to the fact that, despite the sun having risen, Duny had not yet transformed back, instead waiting to see when he'd notice it himself and amicably laughing when he did.

Following Eist Tuirseach's marriage with Calanthe, Mousesack stayed in Cintra to heal the injured and see to it that Pavetta learns to control her power. Often accompying Pavetta's newborn daughter, Cirilla, he gained the young princess' familiar endearment.

Searching for Ciri in Brokilon

In 1263, Mousesack was searching Brokilon forest for Ciri, when he came across her and Geralt, who were being attacked by mercenaries; and helped defeat the men.

Later, while the trio were resting under a tree, Mousesack informed Geralt that Calanthe had cancelled Ciri's engagement to Prince Kistrin of Verden, and upon their return to Cintra with Ciri, he would also encourage her to pick her own partner. Mousesack urged Geralt to come with them to Cintra and take Ciri under his guidance, as the druid believed their fates were intertwined by the Law of Surprise. Geralt, who did not believe in destiny and thought that one is only destined to die, declined the offer.

Mousesack reminisced the old prophecy, "the Sword of Destiny has two edges". He explained that like a two edged sword that can either serve its bearer or harm them, the destiny of Ciri and Geralt could be pure or sinister. He further explained that the bond between them could be pure, but only if Geralt connects with her as a guardian or it could manifest itself differently in a negative or destructive way if he abandoned her.

Ignoring the persuations of Mousesack, Geralt got on his horse and rode away into the dark cold forest, still believing the only destiny he knew; the destiny of death.

Mousesack eventually survived the Slaughter of Cintra and fled. In 1272, he and Geralt met again; this time at Ard Skellig, where Mousesack, known here as Ermion, managed to become a hierophant of the local circle of druids. It turned out that he did not want to let Yennefer go to the destroyed part of the forest, which she wanted to explore. He eventually allowed it only after consent from Crach an Craite, even though he was strongly upset by the sorceress because she, with the help of Geralt, stole the Mask of Ouroboros from his laboratory. His anger reached its zenith when Yen used the mask. This rendered the mask useless and also created a huge storm. He calmed down a little, though, when he learned that it was necessary to find Ciri, but he was still very angry.[6]

Most druids on Skellige differ from the deeply-rooted Continental stereotype of a graybearded old man in white robes bowing before sacred oaks, taming wyverns and pestering local lords with petitions to add yet another species to the list of protected beasts. Ermion, Geralt's old acquaintance, was no exception in this regard.
This stiff-bearded, spindly man was the leader of the Druids' Circle in Skellige. He was also Jarl Crach an Craite's advisor on matters of magic and the mystical, as well as on any and all issues requiring more refinement than a well-timed uppercut or a hard-swung axe.
Ermion was known to be obstinate and to have a tendency, quite rare in Skellige, to consider all possible consequences of a particular course of action before it was undertaken. All this meant that conversing with him demanded a considerable amount of time and patience.
Given all this, one can hardly be surprised that Yennefer and Geralt's "rash" and "highly irresponsible" actions regarding the magic anomaly – stealing a priceless artifact from a private chamber being first among them – put Ermion quite out of sorts.
However, despite his difficult character and his somewhat testy relationship with Geralt, Ermion agreed at once to travel to Kaer Morhen and help defend Ciri from the Wild Hunt's forces.
When persuasion and reason failed, Ermion would, as a last resort, turn to violence - and then he became a foe to be reckoned with.
Madman Lugos found this out personally when, in a fit of rage, he attacked Ermion and Geralt. As they had in the past, witcher and druid stood side by side and fought a common enemy.

Mousesack in the TV series, played by Aleksander Bednarz. 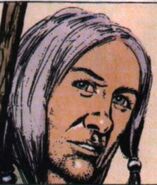 Mousesack as a young druid in "Zdrada". 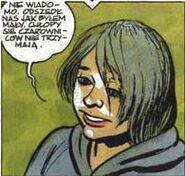 Mousesack as a young boy in "Droga bez powrotu".