The Witcher
The Witcher 2: Assassins of Kings (mentioned)
The "mysterious assassin" (d. September 1270) was a witcher of the School of the Viper and the first member of the Kingslayers to attempt to kill King Foltest, albeit he was unsuccessful. Geralt, who was in the process of receiving his reward for destroying Salamandra and removing Jacques de Aldersberg, was in the castle when the assassin made his move. An intense sword fight played out between the two which narrowly resulted in the death of the would-be assassin.

Since the Viper School is located in the southern part of the Continent, it is possible that he was born somewhere in the Nilfgaardian Empire. At some point in his childhood, he was taken in by the Viper witchers and subjected to the trials, which mutated him into a being with nearly superhuman speed, strength and various other abilities.[1] While training, he became friends with other trainees, including Auckes, Serrit, and Letho.[2]

During winter 1269, the foursome helped Geralt of Rivia track down King of the Wild Hunt since the former saved Letho from a slyzard while on the Path. Alongside Geralt, the four Viper witchers fought against the Wild Hunt, until Geralt exchanged himself for Yennefer. Out of respect for their departed comrade, the Vipers took care of Yennefer, who, suffering from amnesia, began to cause trouble for the group. Eventually, all of them were captured by the Nilfgaardian secret service. In custody, they were approached by Imperator Emhyr var Emreis, who offered to rebuild their school if they sowed chaos in for him in the Northern Kingdoms by killing its kings.[2]

In September 1270, he managed to enter the Temerian Royal Palace in Vizima just when Geralt, who lost his memory shortly after their last meeting, was in the process of receiving his reward for destroying Salamandra and killing the Grand Master of the Order of the Flaming Rose, Jacques de Aldersberg.

The renegade witcher snuck past all the guards, killing two of them in the process and almost killed King Foltest. Before anything else could happen, Geralt rushed to the king's aid; a hard-fought battle broke out in which the dual-wielding assassin got the upper hand, so Geralt threw his recently-acquired coin pouch at his former comrade to stun him, before cutting off his arm and killing him with a slash across the back. The dead assassin was not recognised by Geralt due to the latter's amnesia, however, and his corpse underwent an autopsy to find out who he was.[3]

Immediately after his death, he was searched over by royal medics in the palace until they passed his body to Triss Merigold. She did the autopsy and couldn't identify his age, but did learn that he could see in the dark, indicating to her that he might have been a witcher. The assassin also wore no medallion. 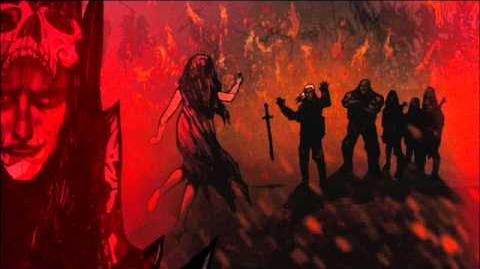 Retrieved from "https://witcher.fandom.com/wiki/Mysterious_assassin?oldid=524097"
Community content is available under CC-BY-SA unless otherwise noted.