The Tower of the Swallow (mentioned)

Wiedźmin: Gra Wyobraźni (mentioned)
The Naglfar is a demonic vessel which is said to be built by demons from the finger and toe nails of the dead. The vessel is said to sail from Mörhogg, the land of Chaos, to the land of the living carrying an undead army which will wage the final battle of good and evil known as Ragh nar Roog.

To this day, Skelligers also cut the nails of their recently deceased in an effort to minimize the building materials available to the demon builders.

The Naglfar, the longship, is made of deadmen's claws and is the vessel used by Eredin and his Wild Hunt warriors. In 1272, Geralt had a dream where he, Ciri, and the other witchers of Kaer Morhen trained in combat on the equipment at the fort. Shortly after, the dream turned into a nightmare, after the Wild Hunt appeared on the Naglfar and attacked Ciri. After the Wild Hunt was lured into a trap near Undvik, Geralt and Eredin had their final duel on the deck of the ship.

I had pleasure to design and illustrate the Wild Hunt Ship - Naglfar. The ship's design went through a long ideation process before it reached its final shape. During the process. I created basic 3D model, which helped with proper scale and proportion, as well as a few detailed concepts of the Naglfar deck, which were helpful in modelling.
- Maciej Wojtala, Artstation

Many sketches and designs for the Naglfar were made. Early ones assumed this ship would fly through the air. In the end, however, the more subdued concepts which better fit the grounded feel of the witcher universe won out. The drawing in the infobox shows the final version of the Naglfar, the ghastly Hunt's equally ghastly vessel.[1]

The Naglfar in Geralt's dream

Concept of quarterdeck (by Maciej Wojtala)

Render of ship (by Maciej Wojtala)

First appearance in one of monic vessel which promo trailers 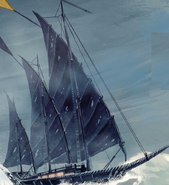