Witcher Wiki
Register
Don't have an account?
Sign In
Advertisement
in: Creatures, The Witcher 2 bestiary, The Witcher 2 Chapter I,
and 3 more
English

Nekkers or nekkras[1] are monsters encountered in The Witcher 2: Assassins of Kings and The Witcher 3: Wild Hunt.

They attack in groups

Nekker claws
Nekker eyes
Nekker heart
Nekker teeth
Cloth
Twine
Nekker trophy
One less fortunate nekker appears in the opening sequence of the game when it is used as bait for an arachas by Iorveth.

Nekkers cease to give XP when killed once Geralt reaches Level 11.

Imagine a drowner that burrows tunnels, climbs trees, is more vicious than usual, and when ambushing its prey, it does so with many of its kin. Now you have a good idea of what a nekker is. These primitive creatures are the bane of the wilderness - the inhabitants of forest villages fear them, and animals give their nests a wide berth. Nekkers are social creatures, gathering in something akin to tribes, for they can only repel the attacks of stronger assailants en masse.
When nekkers venture out as a war or hunting party, they are led by chieftains. These are larger and mark their faces with red clay. Chieftains give orders, turning a wild band into an organized unit, thus they should be eliminated first.
The nekkers' basic tactic is to strike en masse. They burrow from beneath the ground and swarm upon their prey. Though primitive, the tactic is surprisingly effective. One must be ready to repel many foes at once - the fast style is best suited to this. As with other agile creatures, running from nekkers is not the best idea, for the monsters will catch up to their prey and swiftly kill it with multiple hits of their claws.
Witchers can use their full range of skills and techniques when fighting nekkers. Signs, bombs, poisons and oils that augment bleeding are all extremely effective against the beasts. Nekker nests are best destroyed with Grapeshot bombs.

Nekker blood
Nekker claw
Nekker eyes
Nekker heart
Lesser blue mutagen
Lesser green mutagen
Nekkers rarely attack alone, they tend to be found in groups near a nest. If the nest is not destroyed using either Samum or Grapeshot, they continue to spawn.

Take heed, gents, there's nekkers under this here bridge. If you all cross at once, without slowing or stopping, there's nothing to fear. But if your cart throws an axle and you get stuck out there... Well, close your eyes and pray to Melitele.
– Kurt Hammerbach, city guardsman in Vengerberg
A lone nekker is harmless. Five are dangerous. Ten can kill even a veteran monster slayer. Particularly troublesome are the larger, stronger individuals known as warriors, as well as the rare breed of nekkers known as phoocas.
Nekkers and phoocas live in the dark woods that grow in damp, mist-filled valleys, in colonies of one to several dozen individuals. They dig deep burrows for lairs and connect them with a network of narrow tunnels. Using these passageways they are able to move at great speed within and around their colonies.
Nekkers always attack in groups and by surprise. They try to surround their prey as quickly as possible, cutting off all escape routes. Luckily their attack is for the most part disorganized, for nekkers are not gifted with great courage and individual nekkers will often hesitate before overcoming their fear and striking. When fighting them one can use this moment of hesitation to kill the braver individuals before finishing off those who remain in the back.

Individual nekkers are weak, easy marks compared to other monsters; nekkers do not tend to fight as individuals. If you see one, expect anywhere from 2-10 more. Nekkers overwhelm their targets through sheer numbers, surrounding them, then pummeling and clawing victims to death. Even veteran witchers can fall prey to this.

Also, unlike fellow ogroids, nekkers are considerably agile and acrobatic, even more so than the likes of drowners and rotfiends. One could easily leap at Geralt from barrel roll distance and roll back even further to avoid counterattacks. When combined with sheer numbers, nekkers are rather challenging, if not dangerous to engage without sabotaging their mobility.

When facing large groups of nekkers, take advantage of bombs such as Northern Wind or Dancing Star. Sufficiently powerful explosives can help thin out a nekker swarm with ease.

Aard can knock a nekker to its back, allowing for swift execution. Aard can also knock over several nekkers at once, a good way to break through large groups of attackers.

If players are heavily invested in swordplay light attacks, the Whirlwind ability could work nicely as both offensive and defensive means against nekkers, especially when the sword bears the Severance runeword enchantment.

Nekker about to become Arachas bait 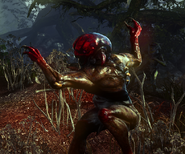 Smile of every dentists worst nightmare 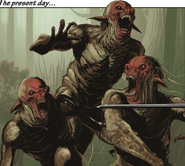 Nekkers in The Witcher: Matters of Conscience