Witcher Wiki
Register
Don't have an account?
Sign In
Advertisement
in: Caingornese, Characters in the comics, Humans,
and 5 more
English

Edit
watch 02:19
Wiki Targeted (Games)
Do you like this video?
Play Sound

Niedamir, son of Audoen, was the ruler of Caingorn and the first king of the Hengfors League. He originally ruled from the Royal Palace in Caingorn, but later moved his capital to the city of Hengfors.

Hunt for the dragon[]

In 1253, when Niedamir was a young king, he participated in the hunt for the golden dragon, Villentretenmerth, and Gyllenstiern's employer. Niedamir joined the hunt due to his desire to conquer Malleore—after the sudden death of its prince, it was left in the hands of his daughter, a princess that the nobility of Malleore was trying to use to increase their power—a thing that would be rendered more difficult should she marry.

Niedamir had asked for her hand, but the nobles attempted to prevent any such union by using a conveniently discovered ancient prophecy which stated that the princess could only marry a man who had slain a dragon. Niedamir heard of the dragon of Barefield, Myrgtabrakke, and so set out on the hunt to slay her, thinking it a way to seize control of the principality while still conforming to the demands of the nobility.[1]

Around the time of the First Northern War, he successfully seized control of Malleore and Creyden, forming the Hengfors League. At the end of the war, he signed the peace treaty with Nilfgaard, along with the other kings of the Northern Kingdoms. During this period, sometime after 1263, the bard Dandelion went and joined his court in Hengfors, fleeing from the war.[2]

During the Second Northern War, the Hengfors League under his control remained neutral with respect to both sides including Nilfgaard, due to the peace agreement Niedamir honored. 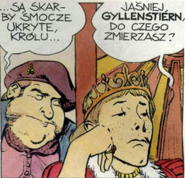