Nilfgaard
The Empire
The Eternal Empire

Coadjutor of the Empire (final period of Emperor Emhyr's rule)

The Nilfgaardian Empire (Ceas'raet aep Nilfgaard \ Nilfgaarda ?[1] in the Nilfgaardian language) is the most powerful empire in the history of the known world. It is located in the southern part of the Continent and boasts both a thriving economy and a strong, well-trained army with talented commanders. It has expanded mostly through the conquest of foreign countries, which were then turned into provinces of the Empire. The Empire's inhabitants believe that "real" Nilfgaardians are only those born in the heart of the Empire, and not those born in the conquered provinces.

The provinces are ruled by either stewards or kings (in cases in which a king willingly surrenders, he retains his throne but is subject to the Emperor or just a vassal). The empire has expanded throughout the years, conquering new lands and going as far to the north as the Yaruga River during the reign of Emperor Emhyr var Emreis.

In the Witcher saga, the Empire is portrayed as an overarching antagonist, with many free people of the North expressing hatred towards it with passion. It is introduced in Sword of Destiny, when it invades Cintra.

One inch above the cross guard, he saw a punch in the shape of the sun in its glory with sixteen rays, alternating straight and wavy, symbolising heraldically the light and heat of the sun.
- Geralt admiring the Viroledan sword he receives from Pinety, The Lady of the Lake
The Great Sun, symbolizing solar radiance and solar heat, is the primary symbol of the Nilfgaardian people. It appears in imperial heraldry, on coins, banners of armed forces as well as the mark of the Viroledan swordsmiths.

The first coat of arms was created by our member SMiki55. The second one, by SMiki and Ruttou, is based on an illustration from Czech edition of the Saga (the drawing beside it).

These flags were created by SMiki55.

For the main article on Nilfgaardian emperors, see Imperator.

Since the Peace of Cintra, the Empire spans from the Yaruga river in the north all the way down to southern parts of the continent, where only a short distance separates it from other mysterious and unknown lands such as Hannu, Zangvebar, Barsa, and Ofir.

To the west Nilfgaardian border is defined by the coastline of the Great Sea, to the east lies Tir Tochair mountain range as well as desolate wildernesses and barren grounds. On the East of the Empire it lies the endless Korath desert, also known as the "Frying Pan".

According to Queen Meve of Lyria and Rivia, the Empire is 30 times bigger than Lyria.[5]

The Empire spans a huge area and thus the climate varies greatly, from warm but mild in Cintra to hot and sunny weather around the Alba and down to the steppes and deserts bordering with the far south. Some territories have microclimates, which are dictated by both the land (like in the mountains or river deltas) to weather such as rain and wind.

A rather large portion of the Empire's territory is also based around the meridians. Sea coasts consist of green, lush, and fertile lands while the more inland areas tends to be barren, with the major exception being large river valleys.[6]

The history of the Empire is still mostly unknown; few elements however permitted to reconstruct broadly the course of events:

In the beginning, at least 1,000 years before the reign of Emhyr var Emreis,[7] what is now called Nilfgaard was simply a small kingdom, composed of only a few scattered villages by the capital on the Alba river and under the control of a king. The first settlers also mixed with the Black Seidhe, a group of elves in the Alba valley.[8] After this cross-cultural event, Nilfgaardians incorporated most of the elven culture as their own, including keeping their language.

An unknown time later, kings disappeared and in their place they left behind their power to the most old and wise citizens of Nilfgaard, who then formed the senate, making the former kingdom into a republic.[9] This type of government continued for some time until eventually the senate's power was overthrown by the first emperor, establishing Nilfgaard as an Empire. However, it's unknown when this happened, though it was sometime prior to the 1150s, as by then it was being ruled by the first known emperor, Torres var Emreis.

Sometime after Torres' death, likely in the early 1200s, Fergus var Emreis ascended the throne. However, he was considered by many to be a weak emperor and was ultimately overthrown by an unnamed Usurper in 1233.[10] During the coup, Fergus was killed by the Usurper while his son and heir, Emhyr, was cursed by the mage Braathens, who turned him into a humanoid hedgehog. Despite having dogs set on him, Emhyr managed to escape and, with help from his own acquaintances, left the Empire.

During the Usurper's reign, he proclaimed a national amnesty, diminished the cult of the Great Sun's rights, and, in 1239, he annexed Ebbing. During this long conflict, Metinna, Nazair, and even Maecht were conquered by the Empire by the mid-1250s.

In 1257 a uprising led by Ardal aep Dahy, Vilgefortz and other Emhyr's supporters stormed the Imperial Palace and killed the Usurper. Emhyr var Emreis, the right heir to the throne who was banished from his country, entered once again in Nilfgaard and became the new Emperor, gaining the nickname "the White Flame Dancing on the Barrows of his Enemies" or in Nilfgaardian language, "Deithwen Addan yn Carn aep Morvudd".[11]

For the full article, see Northern War I.

During his reign, Emhyr continued the expansion started by the Usurper, beginning the First Northern War in 1263 by invading Cintra, whose capital was besieged and most of the inhabitants slaughtered. Meanwhile, Emhyr tasked Cahir Mawr Dyffryn aep Ceallach, a knight within his secret service, to capture Cirilla, the granddaughter of Queen Calanthe of Cintra and Emhyr's secret daughter (and whom he planned to marry). However, Cahir failed in his task and was imprisoned for two years in the Citadel at Nilfgaard while Emhyr continued to try and push into the North. This came to an abrupt halt though during the devastating Battle of Sodden Hill where the North's mages played a crucial part and ended the First Northern War with Nilfgaard's defeat. Despite this, the Empire held fast to Cintra and in 1267 managed to suppress a rebellion, capturing their leader, Windhalm of Attre, and having him executed as a show of force.[12]

Still set on taking the North, in the summer of 1267 Emhyr set in motion plans to start the Second Northern War, this time enlisting the help of several powerful mages to stage a Thanedd coup to remove the North's mages and thus their advantage that won the last war. While the plan went awry, it ultimately led to the Brotherhood of Sorcerers downfall and, with King Demavend of Aedirn faking an invasion at his borders to try and make it look like it was the work of Nilfgaard, Emhyr used this to mobilize his army and invade the North once again. With the North in chaos from Vizimir II's assassination, Nilfgaard's invasion, and the distrust towards mages, it looked like Nilfgaard would finally capture the North.

However, to truly calm down the people of Cintra, Emhyr still needed Ciri and had people out looking for her. While he was presented with a girl around her age a few months after the Thanedd coup and officially named her queen of Cintra, he knew she wasn't his daughter and only recognized her as queen to quell the masses while he continued the search for the real one.[13]

Stefan Skellen, one of the men entrusted in finding Ciri, had other plans in mind though, wanting to overthrow Emhyr and the monarchy and make the Empire a democracy instead. Together with Ardal aep Dahy, Broinne, D'Arvy, Joachim de Wett, and Berengar Leuvaarden, they decided to find Ciri but then kill her to prevent the continuation of a monarchy. This conspiracy failed though as Berengar Leuvaarden later revealed the plan to Emhyr for leniency. While he was spared, Emhy had Stefan Skellen captured and ordered his execution after a trial.

In the meantime, Nilfgaardian forces clashed against Temerian ones in the Battle of Brenna, where the Imperial Army lost and Field marshal Menno Coehoorn was killed. Following this huge failure, the Empire sent ambassador Shilard Fitz-Oesterlen to negotiate during the Peace of Cintra: in the end the Empire was forced to surrender once again to the North but was allowed to keep Cintra. Although the Empire was officially defeated, the huge damage caused by the war to the Northern Kingdoms forced the latter to buy great amounts of food from the Empire and from Kovir and Poviss, which greatly enriched them.

After Ciri was found, Emhyr was still set on marrying her until he realized the only thing that mattered to her was to be with her adoptive parents. With this, he let her go and, having fallen for False Ciri, who was still officially declared as Cinta's heir, married her in the spring of 1268, officially making Cintra part of the Empire.[11]

Third Northern War started around 1271 after the failed summit in Loc Muinne. Once again the army, commanded by the new Field Marshal Havart var Meohoen, invaded the North conquering the kingdoms of Aedirn, Lyria, Rivia, and Temeria, which remained without a leader after the Kingslayers murdered both Demavend III and Foltest by order of Emhyr.[2] When Nilfgaard approached Kaedwen, King Radovid V of Redania invaded his neighbors and assumed control over Kaedwen. Instead of two weak enemies, Nilfgaard, who in the meantime conquered the capital city of Vizima in Temeria and was stationed in Velen, now was forced to face one large, powerful one.

If Emhyr wins the war: After the assasination of Radovid and the death of Sigismund Dijkstra, the North without a leader couldn't defeat the armed forces of Emhyr, who conquered the whole North.

If Radovid wins the war: Thank to the strategic moves of Radovid, Emhyr was ultimately defeated by Redanian troops and was ultimately assassinated once returned in Nilfgaard by his opposition, tired of his continuous failures during the war.

If Dijkstra wins the war: With Sigismund Dijkstra as head of state after Radovid's death, the North managed to defeat Emhyr's army, who was later assassinated by his opposition once returned in Nilfgaard.[4] 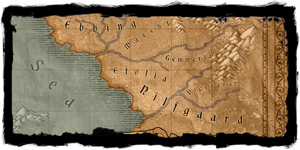 The Nilfgaardian Empire is a powerful and ancient realm in the far south. Its capital is the city of Nilfgaard, located on the river Alba. The Empire arose through conquests, assimilating nearby kingdoms. Only the inhabitants of lands near the river Alba have the right to call themselves Nilfgaardians. A significant amount of elven blood runs in the veins of the people, while their language is a variant of the Elder Language. The Empire is aggressive and willingly invades neighboring lands. Its war with the Northern Kingdoms ended five years ago, yet in spite of the peace treaty, Nilfgaard has failed to give up its claims on the northern territories.

Retrieved from "https://witcher.fandom.com/wiki/Nilfgaardian_Empire?oldid=500454"
Community content is available under CC-BY-SA unless otherwise noted.