Edit
watch 02:58
No Man's Sky Update - The Loop
Do you like this video?
Play Sound
Sub-Pages:

Netflix's The Witcher
Nivellen was a cursed man who lived in Redania, in the woods near Murivel, in a secluded manor. He was called "Fanger" or "Degen" by the locals and stories of his "monstrous" nature were used to scare children. After a long conversation, Geralt decides that Nivellen cannot be a monster because he is able to touch silver tableware and the witcher's medallion without ill effects.

When he was a boy, Nivellen was quite sickly. His father and grandfather before him had made a fortune by leading a gang of highwaymen and cutthroats in order to steal from the local people causing his father to be killed in an unfortunate encounter with a two-handed sword, Nivellen inherited command of the gang. Initially the enthusiasm and naïveté of youth banished any feelings of remorse and he participated willingly in the gang's misdeeds.

One day the gang robbed a temple in Gelibol and coerced Nivellen into raping the young priestess there. Before killing herself, she spat in his face and cursed him, telling him that he was a "monster in a man's skin" and that he would become a "monster in a monster's skin". She also mentioned a way to lift the curse, but Nivellen didn't quite understand that part; he tells Geralt that he only recalls her saying something about blood and a loved one. Unbeknownst to Nivellen and the gang, the woman was a priestess of Coram Agh Tera, the Lionhead Spider cult and her curse was not an idle one.

A couple of days later, Nivellen's form changed, though his mind and personality remained untouched. The household staff fled while Nivellen raged, confused and in a panic. The manor itself reflected his mood, with doors banging shut and furniture flying about everywhere. Quite a few people died as a result and even his cat, Glutton ran away in fear.

Left alone in the manor, he resigned himself until one day he sees a man trying to steal roses from his Aunt's garden, enraged, he rushed outside in order to deal with the merchant, where he recalled childhood fairy tales about princesses turning frogs into princes through true love, a desperately lonely Nivellen demanded that the trader give him his daughter in exchange for his life, only to learn that she was too young as she was only 8 years old. However, feeling sorry for the state of the trader, Nivellen invited him inside his house and gifted him a small fortune as he had large reserves of money in his manor.

Word of this quickly spread and within 2 weeks, another trader came to his manor with his daughter, coming to an agreement with Nivellen, which involved the girl keeping Nivellen company for a year in return for a tidy sum. Initially terrified, she grew accustomed to living with Nivellan after a month, however, Nivellen was very awkward around her and couldn't bring himself to talk to her as he had no experience with talking to women, thus, he decided to resign himself to his own means once this period came to an end, refusing to entertain people who came to his manor with similar propositions, however, he later caved in due to loneliness and decided to take in females to keep him company.

At some point during Primula's stay at his manor, he became more accepting of his own state and longed less and less to return to his original state, having grown accustomed to the benefits of having a monstrous body, such as an inhuman constitution, as well as having access to the magic was granted along with the curse, whereas he was sickly and homely in his human form. Another far more important advantage was that his reputation of being a monster proved to be a deterrent to familial enemies and robbers. Lastly, he felt his body proved to be an aphrodisiac, allowing him to capture the interest of girls who would not have paid him attention otherwise.

Twelves years into the curse, he met Geralt of Rivia, who was investigating the deaths of a merchant and a female companion near his manor, and after a confrontational first encounter with Geralt, with the latter masqueraded as being a traveler who lost his way, Nivellen, surprised that the witcher is apathetic to his appearance, decides to invite Geralt to his house after the witcher requests some water for his horse and himself. He opens up to the witcher after the latter inquires about his situation and deduces Geralt isn't a normal human. Upon learning this fact, he assumes that Geralt has been sent to kill him on somebody else's request but quickly learns that this is not true and that Geralt could try to undo his curse for him, which he quickly shoots down, to the slight surprise of the witcher.

Nivellen then notes a woman named Vereena keeps him company, and that he is aware of her role in the deaths of the previously encountered merchant and female. Suspecting that she might be trying to harm him, he asks Geralt if he should be concerned about the monstrous nightmares he is having recently and whether she has a hand in it and whether or not he could do something about it, something Geralt could not conclusively answer, besides affirming that Nivellen should be cautious. As he sees Geralt out, they both share the opinion that Vereena may be a rusalka and bid the witcher goodbye.

Later that evening, Geralt confronts Vereena, having figured out that she was a bruxa, and both of them end up fighting. In the midst of this, they're interrupted by Nivellen who calls out her name, allowing Geralt to attempt to slice her, but fails, resulting in Geralt being thrown into the scaffolding and getting buried underneath it. Vereerna paralyzes Geralt with a scream while she moves towards the witcher to kill him, but Nivellen calls her out once more, this time impaling her with a long pole. However, she doesn't die immediately and instead pulled herself along the pole, impaling herself further, as she tried to get closer to Nivellen, who was still holding onto the other end of it. As she used telepathy to tell him she loved him, she grabbed Nivellen's head and moved to rip out his throat when Geralt reacted, beheading her before she could kill Nivellen. Incidentally, her death causes Nivellen's curse to be lifted. 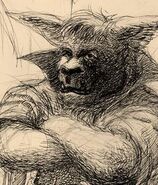