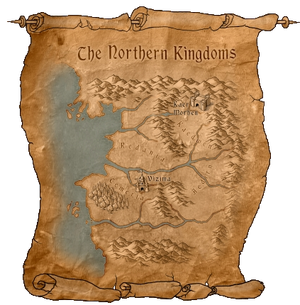 The Northern Kingdoms or the Northern Realms, sometimes just referred to as the Four Kingdoms, are a group of human states north of the Amell mountains. Their inhabitants are called Nordlings by the Nilfgaardians (both the ones from the core of the Empire, and from the conquered provinces). Aside from humans, a number of dwarves, elves, gnomes, and halflings live in the Northern Kingdoms as second-class citizens.

The Northern Kingdoms were invaded and partially conquered by the Nilfgaardian Empire.

During the Third Northern War, only King Radovid V of Redania remained of all the crowned heads of the major kingdoms. For this reason, during this war the Northern Kingdoms were known as Radovid's Realms.

Upon the First Landing, and the arrival of humans on the Continent, the Northern Kingdoms were just large areas of uncolonized land inhabited by the Elder Races, and others races such as vrans and werebbubbs, before the eastward expansion of the people later known as Nordlings, around five hundred years ago.[1]

After the elves were pushed east by human expansion, at least twenty four cities throughout the kingdoms were built by the Nordlings on the sites of elven settlements, such as Novigrad and Vizima.[1]

In 1263, the First Northern War broke out when the Nilfgaardian Army, led by Menno Coehoorn, crossed the Amell Mountains, on the orders of Emperor Emhyr var Emreis, into the Northern Kingdoms.

Nilfgaard quickly took control of Marnadal, then slaughtered Cintra, causing the suicide of Calanthe. They then marched north into Sodden, taking control of Upper Sodden in a quick battle with a northern army. From there the Nilfgaardians crossed the Yaruga into Lower Sodden and were defeated in a massive battle, which resulted in more than 30,000 deaths and the defeat of the Nilfgaardian forces back past the mountains.[1]

Scroll 1: Temeria, Redania, Kaedwen, Aedirn, Kovir, Poviss... There are few who can keep track of the North's many kingdoms and duchies. No sooner had humans seized the land from dwarves and elves than shattered it into dozens of tiny pieces and continued the fight for control amongst each other.
Scroll 2: Time and time again, come the thaw of spring, the leaders of the North resumed their petty wars. Temeria attempted to strip Sodden from Cintra. Aedirn and Kaedwen vied for control of the Pontar Valley. Yet, when the black-clad Nilfgaardian legions appeared from the south, they reckoned that, in the end, they stood more united than divided.
Scroll 3: When the Nilfgaardian invasion began, most presumed the North would be obliterated in a matter of weeks. Yet, to their great surprise, the outnumbered and underequipped Nordlings managed to repel the Empire's legions.
Scroll 4: Had the involvement of mages proved the deciding factor in the North's victory? Or was it the tactical genius of well-trained generals? Perhaps the contributions of Oxenfurt's brilliant inventors? Debates on the topic rage to this day. It seems not even a united victory can keep Nordlings from being at each other's throats for long...
Chest 1: The Northern Realms are bordered by three mountain ranges to the north, east, and south – the Dragon, Blue, and Amell Mountains – and the Great Sea to the west. Yet, what lies beyond these? Nordlings themselves are not quite certain, and to be honest, it's not their most pressing concern. Preoccupied by local disputes, quarrels, and wars, they haven't the time to take interest in foreign lands. Alas, the Nilfgaardian invasion serves as proof that the rest of the world is not of the same mind.
Chest 2: What links a town like Vizima, proud capital of Temeria, or Oxenfurt, a center of learning for all the North, with Aedd Gynvael, a provincial settlement at the end of the known world? Nothing, it would seem... After all, each of these places looks, sounds and even smells different. Their origins, however, are identical – all were founded atop ancient elven cities. The ruins sprawling beneath their streets bear witness to this fact. What caused elven civilization to collapse? Plague? Cataclysm? No... Their destruction was wrought by humans.
Chest 3: Nordlings often feel conflicted about magic and those who practice it. On the one hand, mages served an undeniably crucial role in the North's defense against Nilfgaard. Yet on the other, their unabashed egotism and tendency to meddle in politics became an irritation to communities and sovereigns alike. The epitome of such arrogance was Philippa Eilhart who, rather than sit content as king's counsel, resolved to take on a leading role herself. This dream would not last, however... And in the end, the flames of pyres raged across the North.

Detailed map of the Northern Kingdoms

Detailed Map of Northern Kingdoms in The Witcher 2 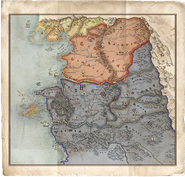 Northern Kingdoms in The Witcher 3