Witcher Wiki
Register
Don't have an account?
Sign In
Advertisement
in: Settlements, Novigrad, The Witcher 3 locations,
and 3 more
English

The World of the Witcher
The Witcher: Of Flesh and Flame
Novigrad is a free city within Redania and is therefore not subject to the rule of that kingdom. It is one of the major ports on the continent and populated by nearly 30,000 inhabitants, making it one of the largest cities in the North.

Like any true metropolis, Novigrad has many factories and is home to all manner of craftsmen offering every ware possible and one can even find the occasional con-man or shady dealer. The city is also home to numerous banks and even has a zoo. The Eternal Fire is said to protect the city's inhabitants from all evil, monsters included. The thick city walls have never been breached, as they were tactfully designed by the architects of the Oxenfurt Academy.

Novigrad is inhabited by an unusually colorful group of both permanent residents and those in town on long and short-term visits. Most eye-catching amidst the throngs of common townsfolk, stall-keepers, and craftsmen are those practicing the more roguish professions. There is no army in the city but it does have a secret service, an ever-present Temple Guard, and a powerful Temple Fleet.

One of the most recognizable emblems of Novigrad is a silver ring with three golden keys, symbolizing opening of the land, the sea and the river.[2] Apart from it, various motifs of the city walls and the Eternal Fire are utilized.[3][4]

Emblems displayed in the infobox are an attempt to compromise designs used in various sources.

The following illustration has been created by Wiki editors basing on official description and/or depictions.

The following illustration has been used in Wiedźmin: Gra Wyobraźni.

The following illustration has been used in CD PROJEKT RED's The Witcher franchise.

Before the First Landing, Novigrad was a small elven settlement.[5] When the first human ships arrived in the Pontar Delta, the city was abandoned by the elves and it quickly became the capital of a new country created by King Sambuk, the ancestor of the first king of Redania.[6]

During the reign of Vestibor the Proud, Novigrad was conquered by Temeria during the Seven Years' War. The capital of Redania was then moved to Tretogor and Novigrad became a Temerian city for a long period.[7][8]

The situation changed during the reign of Vestibor's grandson, Radovid III the Bold. After long negotiations, a compromise was reached and the metropolis was acclaimed as a free city.[8]

After the First Northern War in 1263, King Vizimir II of Redania forced Novigrad into ius stapulae, blocking all merchandise passing the city for inspection and sale within the city.[9]

The Syndicate and Witch Hunts[] 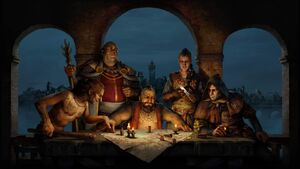 Although Redanian kings are officially recognized as "kings of Redania and Novigrad", real authority is vested in the hierarch by the Electoral College. By 1275 the current hierarch was Cyrus Engelkind Hemmelfart.

Novigrad is one of the three main regions in the third game, with the other two being Velen and Skellige. The city's design has been described as based on medieval Amsterdam, with touches of Venice.

Once part of Redania, Novigrad now has the status of a free city. It is the world's largest city and, without a doubt, the richest as well. Cradle of the cult of the Eternal Fire, it is now home to the church of the same name. It is ruled officially by the head of the church, referred to as the hierarch, though its underworld crime bosses also have a great deal of say in matters.

What is the Novigrad? The Witcher Lore - The Free City of Novigrad

Street in the richer parts of the city

Novigrad in the Curse of Crows 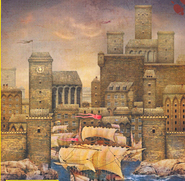 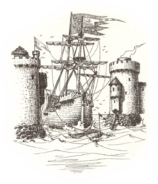 Novigrad in The Witcher: Of Flesh and Flame